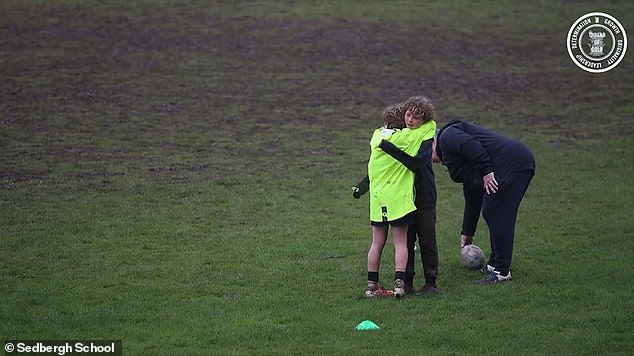 ‘You are a brilliant rugby player, do you understand that?’ Heartwarming video of moment schoolboy gave emotional pep talk to tearful team-mate who was upset that ‘everyone’s bigger than me’ goes viral

This is the moment a schoolboy rugby player gives an emotional pep talk to a team mate who struggling during a training camp.

The players were attending an Easter Camp at Sedbergh School in Cumbria when one tearful player complained: ‘Everyone’s older than me, everyone’s bigger than me.’

A coach was already talking to the youngster when his team mate came over and put his arms around the player to tell him how good he really was.

Footage of the inspirational talk was shared by the independent school which is renowned for producing England internationals such as Will Carling and Will Greenwood.

So far, more than 245,000 people have viewed the footage, including the England and All Blacks teams.

The young boy, pictured in yellow, told his friend that he was a brilliant player

Do you know the people in this heartwarming video?

‘You are a brilliant rugby player. Do you understand that? You are insane! You are actually insane for your age. Right, give me a hug.’

The school shared the 30-second clip of the pep talk, commenting: ‘This heart-warming moment was captured recently at our Easter Courses.

‘This short but emotional clip captures the true spirit of @sedbergcourses and shows the power of the friendships that are made here.’

The coach seen in the clip, Graham Higginbotham said the boys, Jack and Bob, had only met two days earlier.

The school shared the clip of the emotional team talk, which was described as ‘the spirit of rugby’

He told The Times: ‘Bob was being stretched in the session from a rugby point of view, which you need, and Jack recognised that and supported him so well.

‘It’s phenomenal really, such a young person who came to help his team mate, and bear in mind they had only met two days before. They weren’t friends before the course.’

He added: What I head was really the core values of rugby and the course, which we try and teach the children.’

The official England Rugby twitter feed said it was an example of the ‘best team-mate ever’, while the All Blacks responded it was ‘the spirit of rugby’.

Do you know the people in this heartwarming video?: Contact us: [email protected]