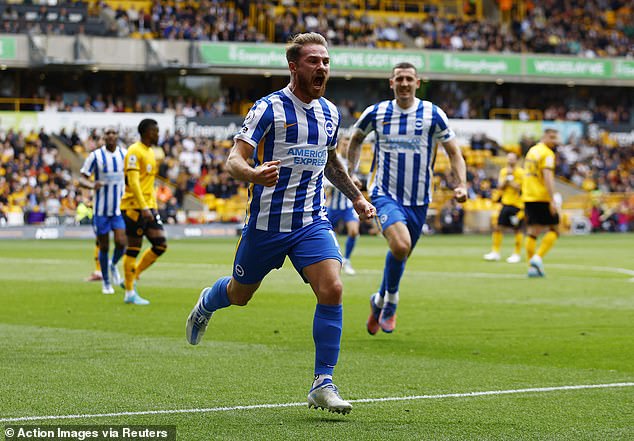 By Tim Nash For The Mail On Sunday

All the pre-match talk surrounded the return of Wolves’ main man Ruben Neves – but it was another midfielder, Brighton and Hove Albion’s Alexis Mac Allister helped settle this game in the battle for the ‘best of the rest’.

Mac Allister kept his nerve to open the scoring from the spot in the 42nd minute after his first penalty nine minutes earlier had struck the post.

Leandro Trossard and Yves Bissouma gave Graham Potter’s far superior side the extra goals they deserved after Wolves goalkeeper Jose Sá had made several saves to keep his team in contention.

It was no more than the Seagulls deserved after outplaying Bruno Lage’s side.

Wolves failed to produce an effort on target until the 85th minute and have now lost four of their last five matches as their challenge for Europe has withered.

Brighton created the first chance when Enock Mwepu unleashed a fierce drive from 25 yards that swerved away from Sá, who made a diving save to his left.

Mwepu seemed determined to make a name for himself and he produced a snapshot that was easier for Sá to gather after Marc Cucurella’s deep cross found him lurking at the far post.

Sá was called on again, this time to hold Danny Welbeck’s curling, rising effort before the Brighton forward won a foul and booking for Wolves captain Conor Coady.

But they were soon second best again, initially after Brighton won their first penalty.

The 33rd minute spot kick was awarded after referee Simon Hooper was invited to view the pitchside monitor by VAR when Solly March’s cross from the right caught the left forearm of Romain Saiss, who appeared to move towards the ball.

Sá had to be alert after Leandro Trossard popped up unmarked deep in the box for a low, angled shot that the goalkeeper tipped away to his left.

Trossard, who has produced some impressive displays this season, scored in the 70th minute

Nine minutes after winning their first penalty, Brighton won a second spot kick when Willy Boly tripped and fell and caught Welbeck, who also landed in a heap.

This time Hooper had no hesitation in pointing straight to the spot, and Mac Allister despatched his kick to the same side, but much higher, giving Sá little chance.

Not surprisingly, Wolves were booed off at half-time and it was no surprise as Brighton completely deserved their lead.

Wolves made a double substitution at half-time with Raul Jimenez and Pedro Neto on for Silva and Neves.

But it made little difference, certainly initially, as Brighton continued to threaten more goals.

Moises Caicedo forced Sá to save low down to his right with a close range effort, then Mwepu’s rising effort was deflected over by the sliding Saiss before Mac Allister’s deflected drive from distance looped up and was held by the goalkeeper.

In the meantime, there was worse news for the home side as Nelson Semedo limped off with what appeared to be a hamstring injury as he chased a ball down the right.

He was replaced by Jonny Castro Otto to complete Wolves’ permitted three substitutes.

Trossard made it 2-0 when Jimenez lost the ball upfield and Brighton broke, the forward cutting inside after turning Conor Coady before firing home into the opposite corner for his third goal in four games.

Willy Boly had Wolves’ only effort on target with a weak header straight at Robert Sánchez after Neto’s shot had been blocked.

Bissouma rubbed salt into Wolves’ wounds in the 86th minute with a low drive from 22 yards that evaded Sá after Coady dived to head away Cucurella’s cross.

Jimenez hit the post with the last kick but even a consolation was beyond sorry Wolves.