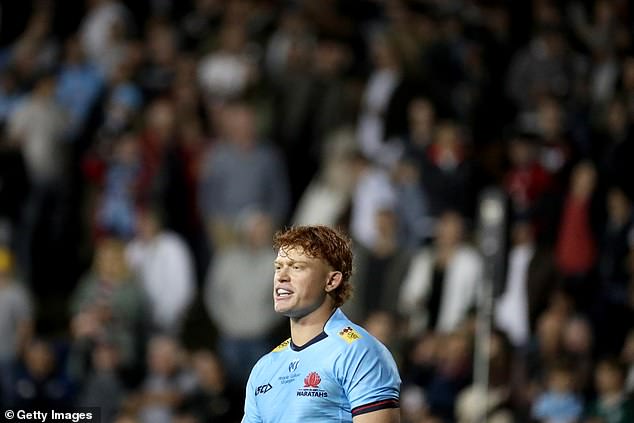 Ex-NRL star’s son goes viral as he breaks down in tears after NSW Waratahs score huge upset: ‘It was a bit too much emotion for me to handle’

NSW Waratahs fly-half Tane Edmed has lifted the lid on his emotional post-match interview on Saturday, which saw him become an internet sensation.

Edmed inspired the Waratahs to a shock 24-21 win over the Crusaders at Leichhardt Oval on Saturday, before holding back the tears as he processed the achievement.

The 21-year-old grew up watching his father Steve playing at the famous old ground for the Balmain Tigers, which made the stunning victory over the Super Rugby powerhouse even sweeter.

‘My father played a lot of footy here and I played all my junior rugby league just down the road at Blackmore Oval,’ Edmed told the Sydney Morning Herald as he explained his emotional interview.

‘I probably kicked thousands of balls down at Leichhardt No2.

‘It was just a really good feeling driving up here and I had 30 friends and family in the stands, and to get a win like that with these boys […] we had such a tough year last year. It was a bit too much emotion for me to handle.’

He added: ‘It has been such a tough road for these boys, and to get a win – and then for me to get a win like that in front of my friends and family, and on the field I have grown up playing on – it was just amazing. I was just a bit lost for words.’

His father, who played in the 1989 Grand Final against Canberra, was rightly proud of his performance.

‘It was great, I was really proud of him,’ he said.

‘He works really hard. I don’t know anyone who works as hard as him, I am sure they’re out there. It has been a pretty tough couple of seasons for the Waratahs.’

Edmed was promoted to the Waratahs’ starting squad five weeks ago and hasn’t looked back since, making the No10 jersey his own.

After a winless season last year, the Waratahs have been one of the surprise packages of the current Super Rugby campaign and the win over a Crusaders outfit containing eight All Blacks put them on the verge of securing a playoff spot.