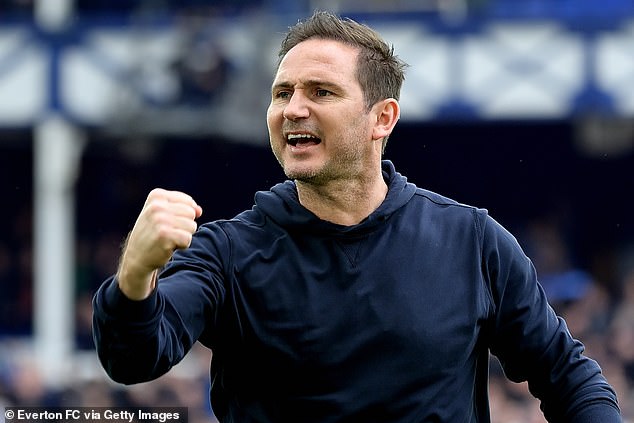 By Charlotte Daly and PA Media

Everton manager Frank Lampard urged his side to show the same level spirit they demonstrated against Chelsea in their five remaining games.

The Toffees boosted their hopes of Premier League survival as Richarlison’s second-half strike saw them beat Chelsea 1-0 at Goodison Park on Sunday.

Lampard said he was proud of his side’s performance and thanked the fans for their support but insisted they must stay ‘level-headed’.

Lampard told Sky Sports: ‘We did brilliantly. We dug in – the team, the stadium, the fans were the man of the match. The fans were in the middle of it and the players could see on the way in (to the ground) what it means to them.

‘They got behind us, they were nicely aggressive and this place needs (to be) a hard place to come.

‘We have to keep level-headed. We’re still in the relegation zone, we have the extra game and we have to go with the same spirit every game. We need to perform at that level every single game.’

After a relatively uneventful first half at Goodison Park, Everton went 1-0 up in th 46th minute thanks to Richarlison.

The Brazilian forward pounced on a Cesar Azpilicueta mistake to slide the ball past Edouard Mendy to put the hosts in front.

The 24-year-old’s goal was his ninth strike in all competitions this season – he has two goals more than Everton’s next highest scorer, Andros Townsend.

It could prove to be a crucial moment in Everton’s bid for survival, with the club currently in the bottom three heading into the final weeks of their campaign.