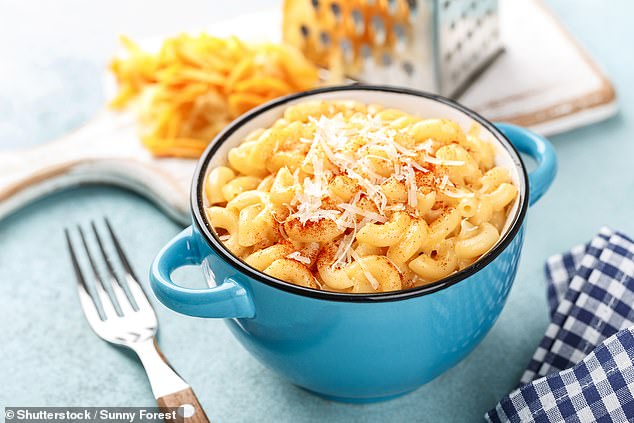 Exhausted new mum branded ‘disrespectful’ and ‘mean’ after serving in-laws mac and cheese for dinner – so who is in the wrong?

A new mum has been described as ‘disrespectful’ and ‘mean’ by her husband, after she served her in-laws macaroni and cheese for dinner.

The exhausted mum revealed she had been trying to avoid having visitors because she was tired, felt her home was a mess and wanted to bond with her first baby.

So she was shocked when she answered a knock on the door to find her husband had invited his parents to dinner without letting her know.

A new mum has been described as ‘disrespectful’ and ‘mean’ by her husband, after she served her in-laws macaroni and cheese for dinner

She said she wanted to buy take out but her husband pressured her to ‘present something homemade’.

In a post on Reddit the mum said her husband invited his parents sided with his family saying serving mac and cheese was ‘more offensive’ than serving nothing at all.

‘I understand how some guests might find it offensive especially his family but I was just trying to make a quick homemade meal like my husband wanted. What’s wrong with Mac n’ cheese?,’ she asked.

The pair had welcomed their first born son four weeks prior and the mum said she was ‘exhausted’ with barely any time to shower or fix her hair.

‘My husband’s family had been pressuring us to visit to meet the baby. I tried to hold them off as much as I could but yesterday, I was surprised to find them standing on the porch. Turns out hubby invited them for dinner,’ she wrote.

‘He suggested that I go inside the kitchen and prepare something, anything long as it’s ‘homemade’. I said fine then went and made some Mac N cheese. The reason I prepared this meal is because of how easy it is,’ the flustered mum wrote.

The meal caused an argument among the family members and the woman’s in-laws accused her of ‘keeping the baby from them’ noting they had ‘missed out on an entire month’ of his life.

When they left thee argument continued with her husband who then went on to ‘give her the cold shoulder’ and refuse to eat food she made in solidarity with his parents.

‘I told him I was too exhausted to cook their ‘traditional feasts’ that I was forced to learn from his mom. He took offense and said that I was being mean and disrespectful towards not only his family but his culture,’ she said.

She added that she went in to her room to be with her baby and he called his parents and ‘sat on the phone for an hour’ apologising for her behaviour.

Who should have cooked dinner?

But it appears most people reading the story believes the young mum was the one owed an apology.

‘No one should expect an exhausted new mother to cook a whole feast, if her husband had a backbone he would have stood up for her,’ one woman said.

‘If he let the place get trashed because he believes cleaning is woman’s work then you need to dump him, that’s before we even get to inviting people over for a dinner party without letting the presumed cook know,’ said another.

The woman explained she is from an American background and her partner is Asian, which could have lead to a culture clash.

But people from Asian cultures said this just made the family’s behaviour worse.

‘There isn’t an Asian culture I’m aware of that doesn’t practice some form of postpartum confinement where it is expected that the new mother do nothing other than rest and bond with the baby. IF they were so ‘traditional’ they should have showed up with food, offered to clean the house, and run a load of laundry while they’re at it,’ one woman said, noting her own Asian heritage.,

Others agreed saying in their culture mums are ‘pampered and don’t even have to get out of bed if they don’t want to’.

Some people said they would be thrilled to be served cheesy pasta and have baby cuddles.

The mum thanked everyone for their support and revealed her husband was still sulking about the incident.