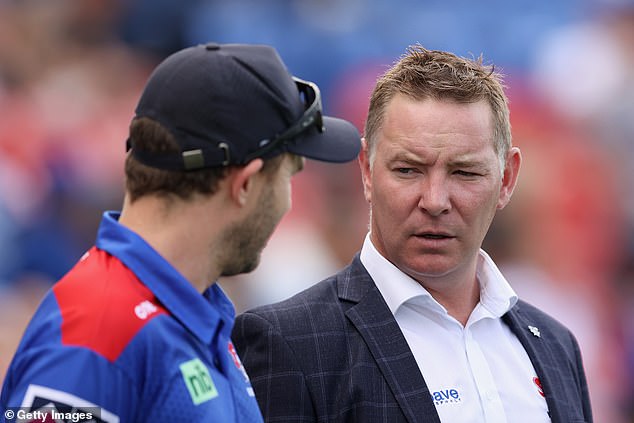 Knights coach Adam O’Brien says his side is IMPROVING after copping a 50-2 thrashing from Melbourne: ‘People are going to think I’m off my head’

Adam O’Brien insisted there were positives to take from Newcastle’s performance, despite seeing his team being thrashed 50-2 by the Storm on Sunday.

The Knights have scored four points and conceded 89 over the past two games, but while O’Brien apologised to the fans last week following a 39-2 shellacking against Parramatta he cut a more optimistic figure after the defeat to Melbourne.

‘People are going to think I’m off my head if they look at the scoreline and think that there was [improvement] but there was some response,’ he said in his post-game conference.

‘There were some parts I didn’t see, the fundamentals like catching the ball off kick-offs and kicking off properly, I didn’t see all that.

‘So I’m not happy with that stuff but some individuals showed they really care but we were still soft in some parts out on our edges.

‘They [the Storm] played way too quick, Harry had way too much time, they were having a good time out there at the end.’

Coupled with the Bulldogs’ shock win over the Sydney Roosters on Saturday, Newcastle’s six-game losing run has plunged them at the bottom of the NRL ladder.

O’Brien conceded his side lacked confidence, but insisted the injuries that have decimated the Knights had played a major role in the losing run.

‘We’re lacking confidence and we’re lacking personnel […] the only answer is to stick together and fight our way out,’ he added.

‘We’ll come out the other side, unfortunately we’ve done it annually for a long period of time now.’

Newcastle are without Dane Gagai, Jayden Brailey, Lachlan Fitzgibbon and Hymel Hunt and while O’Brien refused to use the injury crisis as an excuse, he noted he could barely name a 24-man squad.

‘I can’t fill the 24 on the sheet that you’ve got fill out on Tuesdays because I’m nearly making names up,’ he continued.

‘We’ll get together and we’ll fight it. We did it last year, we were on a losing streak and then got a couple of key personnel back and some confidence.’