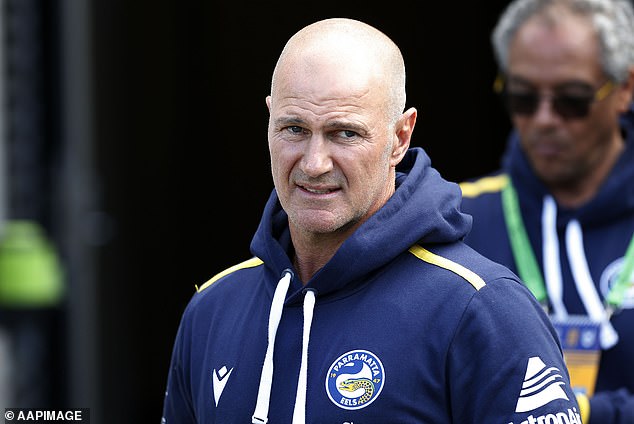 The Parramatta Eels have fired back at fans who slammed coach Brad Arthur and accused him of nepotism following his team’s 35-4 thrashing against North Queensland on Saturday.

Arthur came under fire on social media for selecting his son Jake at halfback and shifting Dylan Brown to centre.

Fans replying to the match report shared by the Eels’ official Facebook page vehemently disapproved of the decision, pinning the loss on Arthur and suggesting his son was not deserving of a place in the first grade squad.

Some supporters went even further, calling for Arthur to resign and joking he had moved the in-form five-eight in the competition out of his preferred position to accommodate his son on ‘work experience’.

Comments on Twitter followed the same tone, which prompted the Eels to come out in defense of their coach.

‘Guys. Give some confidence. Doesn’t always to be neg[ative].’ the Eels official account tweeted, accompanying the words with a broken heart emoji.

In a separate tweet, the club added: ‘The Arthur joke is enough. It’s not funny.’

The Eels issued a passionate plea for support to their fans, before deleting the tweets

Both tweets were subsequently deleted as were those from Eels club’s executive producer Kate Cardwell who, according to the Daily Telegraph, said she was ‘sick of the s*** comments’

Eels chief executive said the comments made on social media from the fans had crossed a line.

‘Our fans are passionate and we understand the disappointment that comes after a loss,’ he said.

‘However, it is completely unacceptable when comments become abusive and highly personal.’

One of the in-form teams in the NRL over the first six weeks of the season, Parramatta have now lost back-to-back games and Arthur warned his troops they couldn’t afford to show the same lack of intensity in the coming weeks.

‘We have got to be prepared because every team is coming after us. That’s what happens when you put yourself up there,’ he said in his post-match press conference on Saturday.

‘Teams are coming after us and we have got to be prepared to match that intensity every week.

‘I know it is a long season, but that is what our job is. We have to match the intensity that teams are bringing against us.’