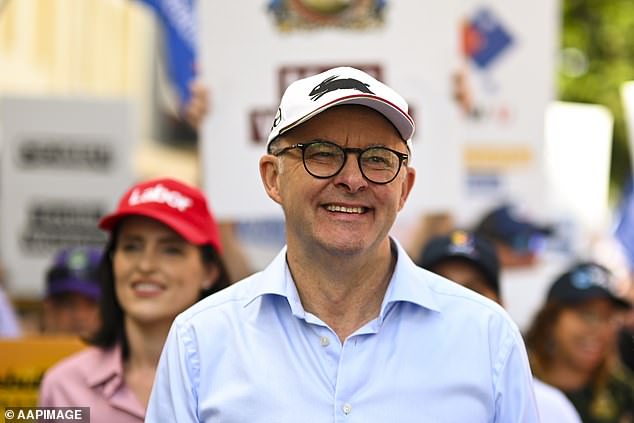 Bookmakers claim Labor is closing in on election victory with the Coalition drifting out to big odds to remain in power.

Despite a difficult start to the campaign for hopeful Anthony Albanese, the ALP are firm $1.38 favourites to win the federal election outright, according to Sportsbet.

Scott Morrison’s Coalition have blown out to $3 to hold onto government, with the betting agency telling Daily Mail Australia one punter recently plunged $80,000 on a Labor victory.

However, the latest Newspoll published in The Australian on Monday showed 45 per cent of respondents believe Mr Morrison would make the better prime minister, while only 39 per cent believed Mr Albanese would do a better job.

Labor have tightened their grip on the upcoming election, according to bookmakers, with Anthony Albanese $1.38 favourite to become the next PM

According to that poll, Labor is leading the government by 53 per cent to 47 per cent on a two-party preferred basis, three weeks out from the federal election. If realised, the Coalition could lose 10 seats at the May 21 election.

Asked if it was time for a change of government, the poll of 1,538 voters taken between April 27 and 30 found 56 per cent agreed and 44 per cent said the Coalition should be returned.

A Resolve poll of 1408 voters published in Nine newspapers on Monday closely mirrored the Newspoll result, finding Labor leading on a two-party basis at 54 per cent to 46 per cent.

Mr Morrison was ahead on the preferred prime minister measure at 39 per cent to 33 per cent.

Bookies say they’re seeing the majority of money coming for the opposition, particularly in derivative bets including seats.

‘We’re now seeing a fair bit more turnover on Labor than the Coalition in every metric,’ Simon Legg from Sportsbet said.

‘The opposite was true up until a few weeks ago.

‘Polls and the punters think the Coalition won’t be re-elected, because at the halfway point of the campaign, the needle doesn’t seem to have moved much in favour of Scott Morrison.’

However, just as was the case with the polls, Bill Shorten was a strong favourite to win the 2019 election – before Mr Morrison engineered a late charge and secured a famous victory for the Liberal Party.

It was a costly mistake for betting companies.

Sportsbet paid out all bets on Mr Shorten winning in 2019 – seeing them lose out on at least $5.2million. They say 70 per cent of the money had come for Labor that year.

The then-Labor leader was an incredibly short favourite at $1.16, with Aussie billionaire Mike Cannon-Brookes, a climate activist who made his money with tech company Atlassian, losing a mammoth $1million bet he placed on Ladbrokes.

Experts are picking a closer margin of victory in the 2022 election, but there is still confidence Labor will win the vote.

‘At the last election, people expected a Labor romp, but that’s not necessarily the case for this campaign, and we were seeing that up until polls closed in 2019,’ SportsBet’s Simon Legg told Daily Mail Australia.

‘We expect this one to be quite a close result at this stage that narrowly favours Anthony Albanese.’

The betting company currently has Labor winning a 77-seat majority, with 51.5 per cent of the money coming for the opposition at the moment – up from 45 per cent a few weeks ago.

‘They’ve never been at that level before,’ Mr Legg said.

SportsBet admitted they ‘learned our lesson’ from the early payout on Labor in 2019 and won’t be offering the same promo this year.