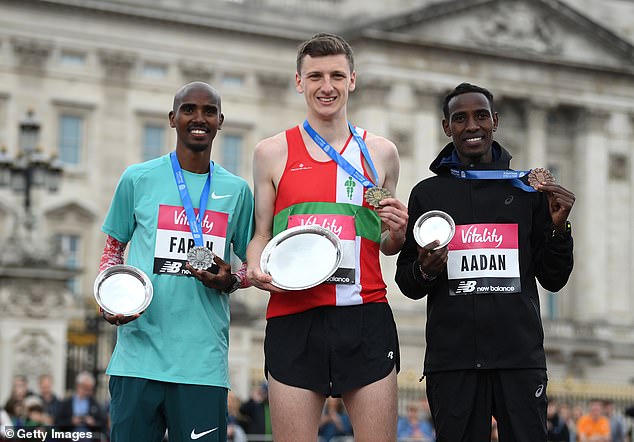 Is this the beginning of the end for Sir Mo Farah? Britain’s four-time Olympic gold medal winner is beaten by a little-known CLUB RUNNER in the London Vitality 10km and admits: ‘I ain’t young any more’ at 39

Farah was racing for the first time since failing to qualify for the Tokyo Olympics last June and he was unable to outpace 26-year-old Cross over the final stages.

Farah, 39, finished in 28 minutes and 44 seconds, a minute outside his best time on the road, and was non-committal afterwards about his plans for the rest of the season.

Cross, a runner who was not even part of the official elite field and wore a bib with the number 219 on it rather than his name, finished two seconds ahead of Farah.

Britain’s four-time Olympic gold medal winner has repeatedly hinted he would like to represent his country one last time before retirement, and this summer presents three opportunities in the World Championships, Commonwealth Games and European Championships.

Although his latest defeat will bring doubts of whether or not he can even qualify for that standard of event anymore.

Cross, who was not even part of the elite field, finishes two seconds ahead of Sir Mo Farah

Farah spoke to the BBC following his defeat, and said: ‘It’s a tough one. It’s your body, Your body has to be ready. You have to be ready to compete with these guys.

‘Today was a tough day. Ellis did really well to beat me. But you have to see where you are. That’s where I am now.

‘You’ve got to take it race by race and let the body see what you can do. I’m not young any more.’

Winner Cross said: ‘I didn’t believe it until 20 metres from the finish, I was like, “He’s just going to outkick me, that’s just that”. I can’t explain the feeling. It’s overwhelming.

‘The most inspiring thing for myself is I’ve beaten somebody that’s an idol.

‘He’s known around the world and I’ve just beaten him over his prime distance. I didn’t quite follow the script today but, to pull it off, I’m delighted.’

The Scot, who is the daughter of Olympic silver medallist Liz McColgan, has had a great start to the season having broken Radcliffe’s British half-marathon record in February before improving her own five kilometres record in Malaga last weekend.

McColgan said: ‘I’m really, really happy with today. Obviously I’m disappointed to just miss it but it is what it is and hopefully I’ll have another couple of opportunities this year.’