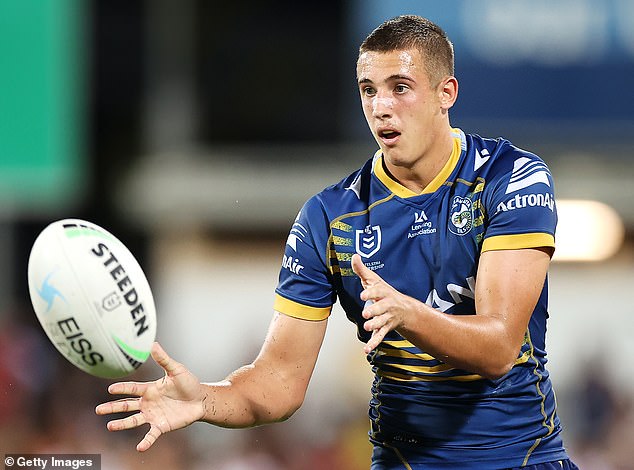 So Parramatta coach Brad Arthur and his boy Jake are copping it in the neck for the Eels’ embarrassing capitulation to the Cowboys on Saturday night.

Well boo-hoo. Welcome to the NRL.

If Arthur didn’t realise that bringing his 19-year-old son into the side at five-eighth and moving the side’s gun number six Dylan Brown to the centres was a risk, he’s in the wrong game.

And if he was happy to bask in the praise when the move worked against the pathetic Knights the week before, he should be just as willing to cop the criticism when it went belly-up in Darwin.

As for Jake, who went from hero to zero in seven days, sorry kid, but that’s just how it goes in the NRL.

Parramatta fans lashed out after Jake Arthur’s shocker against the Cowboys, in which he didn’t make a single run metre – and if his father Brad didn’t see that coming, he’s in the wrong game

The Eels coach was accused of nepotism and giving Jake ‘work experience’ in Parramatta’s halves, prompting several former greats to spring to his son’s defence and lash out at trolls

If you’re good enough, you’ll make it. If you’re not, the closest you’ll get to first grade is cutting up the half-time oranges.

And that’s got nothing to do with the fact that you’re the coach’s son either. It’s the same for every player in the game.

Which is why former greats rushing to Jake’s defence after fans slammed his form and accused his dad of nepotism for giving him ‘work experience’ in the Eels’ halves is so absurd.

‘I don’t know about this nepotism stuff, that’s completely out of line,’ Laurie Daley said.

Andrew Johns said, ‘The kid is still learning his trade … he’ll come back. In all my time playing and coaching, he’s right up there with any young player for his attitude, work ethic and effort. He can play too, don’t worry about that. He’s still a baby.’

Laurie Daley said the nepotism claims were ‘completely out of line’ – but would he have expected anyone to back him up when he had a shocking game as a player?

And former Sharks and Panthers prop Martin Lang tweeted: ‘Jake Arthur is only 19 years of age and is a fine prospect. I’d like to see the CVs of those behind the nepotism accusations. Miserable, jealous individuals who want nothing more than to discredit the coach.’

Did Daley or Johns need any ex-footballer to make a public show of putting a sympathetic arm around them when they had a rare shocker?

More to the point, did Martin Lang – who played under his father John at Cronulla and Penrith – need anyone to tell his detractors to back off?

Of course not, because Lang knew he’d earned his spot fair and square.

No-one ever doubted his commitment or his ability. It was on show every game he played.

Which didn’t stop the criticism or snide comments about the way he charged into the opposition without any hint of self-preservation.

He wasn’t the full quid, they’d say. He’d been knocked out so many times, he was brain damaged.

How did he handle the talk? He ignored it, just like he ignored the media.

It was only after he retired that he opened his mouth to the press and showed himself to be quick-witted, thoughtful and intelligent.

Martin Lang is pictured with his dad Martin, who was his coach at Penrith when they won the grand final in 2003. No nepotism claims were ever directed at the pair because Martin earned his spot fair and square

Which is exactly what Jake Arthur should do.

All this social media talk about nepotism and work experience is just that, talk.

Again, if the Arthurs didn’t know that online trolls will always find a target for their bile, they haven’t been paying attention.

If it’s not that a player is getting paid overs, it’s the way he does his hair.

It is there 24 hours a day. It comes with the territory and the pay packet.

The difference here is that Brad made it so easy for them. He painted the target on personally.

The moment that he signed Jake to the club he was coaching he must have known that this day could come.

He only had to look at the history of the game to see that.

Bobby Fulton put his sons Scott and Brett under enormous pressure when he selected them in first grade at Manly when he was coach in the 1990s.

Fulton senior was one of the greatest players in the history of the game. It’s fair to say that his sons weren’t. Not even close, and just like with Brad and Jake Arthur, there was plenty of talk of nepotism during their brief careers.

It was the same at the Bulldogs around the same time, when coach Chris Anderson picked his brother-in-law Kevin Moore, the son of club supremo Peter ‘Bullfrog’ Moore.

Like the Fulton brothers, Kevin Moore never established himself as a NRL player and the charges of nepotism stuck around, just as they will for Jake Arthur until he turns things around – and there’s only one way to do that.

If he and his father need to see how it’s done, they only need to take a drive up the Great Western Highway to Penrith and look in on Ivan and Nathan Cleary.

Not too many accusations of nepotism out there.