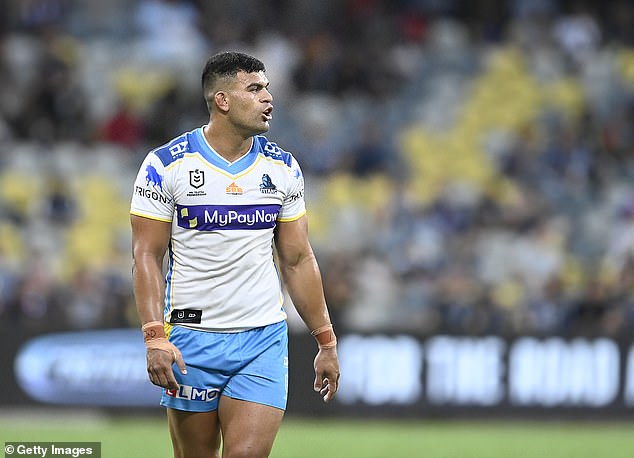 David Fifita has done nothing to warrant his $1.1million salary and the Titans should halve his wages when they sit down to negotiate with the backrower, former NRL great Greg Alexander has said.

The 22-year-old penned a three-year deal worth between $1.1million to $1.2million-a-season with Gold Coast last season after leaving the Broncos and moving down the M1.

His form since joining the Titans, however, has been largely indifferent and Alexander suggested the Queensland star deserved a hefty pay cut.

David Fifita is under contract until the end of the 2023 season at $1.1million-a-year

‘That’s your starting point. He is a unique talent, but you just don’t see it often enough to be forking out $1.2 million.’

Fifita is under contract with the Titans through to the end of next season, but his future hangs in the balance as his performances have seldom lived up to his lucrative salary.

One of the most devastating ball carriers in the NRL, Fifita has attracted criticism for failing to stamp his authority on games on a more consistent basis.

‘I think David is so explosive and can be so dynamic, [but] a lot of people are looking at where are the effort areas in Dave’s game that requires him to be someone who is paid over $1 million,’ former Broncos legend Darren Lockyer told Nine last month.

‘It’s up to Dave, really, if he wants to improve that area of his game.’

Queensland great Wally Lewis was even more blunt in his assessment: ‘If he [Fifita] is getting big bucks, he’s got to have big performances,’ he told Wide World of Sports.

While Fifita has shown glimpses of his talent, he has been unable to lift the Titans as a team and Gold Coast are currently 12th on the NRL ladder with just two wins in eight games.

Following the Titans’ 26-20 loss against the Parramatta Eels in Round 5 former Panthers great Scott Sattler  labelled Fifita ‘one of their worst players’ and said Gold Coast coach Justin Holbrook should consider benching him.

‘I think he’s one of their worst players at the moment, to be quite honest,’ he said on Fox Sports.

‘They need to find more out of him, if they don’t, I’d think about putting him on the bench.’

The Titans star, who faces a race against the clock to be fit in time for the State of Origin opener on June 8, is just one of several big earners whose contracts are coming to an end.

Wests Tigers halfback Luke Brooks is also approaching the final year of his deal, as are four star props – Tom Burgess of the Rabbitohs, Newcastle’s David Klemmer and Luke Thompson and Matt Lodge of Canterbury and the Warriors respectively.

Brooks is due approximately $1million in his final season and the Tigers twice turned down his requests to be let go last offseason and the halfback’s lucrative contract is thought to have put off some potential suitors.

For his part, Brooks indicated he would be willing to take a pay cut and was offered a deal worth approximately $700,000 by Newcastle in the summer.

The 27-year-old has been instrumental in the club’s recent turnaround in form, with two wins in the last three games, but his future remains uncertain.

According to the Daily Telegraph, the foursome may all face a pay cut when they negotiate their next deals.

Players entering the final year of their contracts will hit the open market from November 1 if they can’t agree a new deal with their clubs, or if the latter opt against tabling an offer.