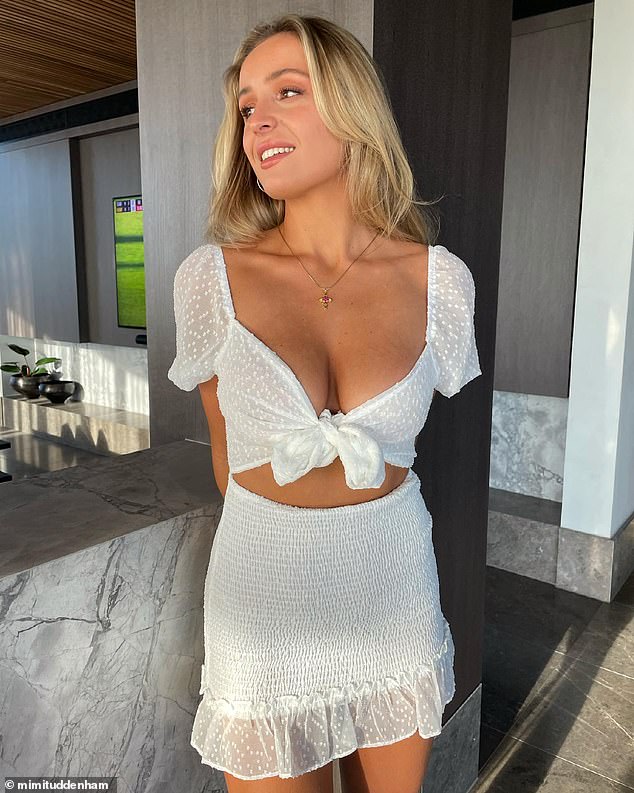 A bizarre video showing Josh Frydenberg dancing with a young girl in a restaurant has gone viral.

Mimi Tuddenham shared the viral video on Saturday after ‘rocking up’ to the same restaurant as the Kooyong MP in Melbourne.

Mr Frydenberg has been the long-standing member for Victorian electorate Kooyong since 2010 and is currently serving as the federal Treasurer and Deputy Leader of the Liberal Party.

Scroll down for the video.

The video shows the pair line dancing in the middle of the restaurant.

The video has been viewed over 22,000 times and shared 130 since it was uploaded two days ago.

Although comments have been turned off under the video, Aussies were keen to share their thoughts on Twitter.

Ms Tuddenham (pictured) shared the viral video on Saturday that raked up over 22,000 views in just two days

‘Imagine someone who was going to vote for an independent, then decides to vote for Josh after watching this. Seems unimaginable to me, so what was the point of it?,’ one person wrote.

‘This man is making financial decisions for all of us?,’ another said.

‘The camera might add “10 pounds”, but it will never give him the missing inches of height here,’ another joked.

Mr Frydenberg is under close scrutiny as the upcoming election approaches with independent candidate Monique Ryan hot on the comfortable MP’s heals.

Ms Ryan is one of a growing group of ‘teal independents’ who are nationally challenging Australia’s wealthiest electorates using grassroots campaigning.

While the mostly-female politicians haven’t formed a united party they have all creating similar policies – largely focused on climate change.

Ms Ryan is a neurologist at the Royal Children’s Hospital Melbourne and has been very popular in recent voting polls.