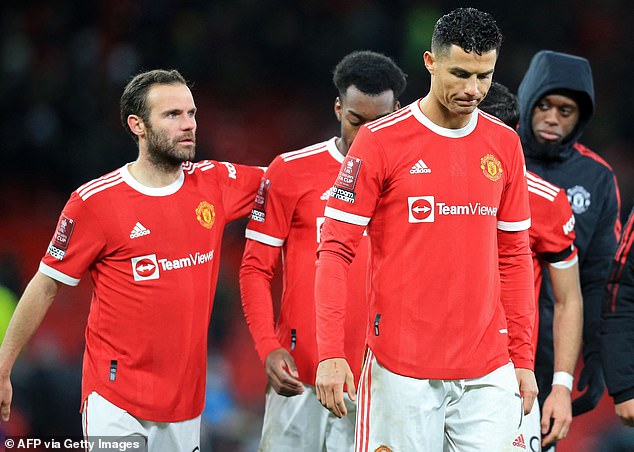 The final home game of Manchester United’s season was once a joyous occasion. There was usually a trophy or two to parade for the fans, with the players joined by their families for a well-deserved lap of honour.

Often it would double up as a rousing send-off ahead of the FA Cup, or sometimes even the Champions League, final a few days later. The Old Trafford crowd would stay behind and salute their heroes with Alex Ferguson addressing them.

It’s fair to say Monday night, when the United team will trudge around the pitch at about 10pm following their last home fixture against Brentford, will be very different.

But with the mood against United’s American owners – the Glazer family – increasingly mutinous, it remains to be seen what kind of reception the players get

Actually, it’s surprising they’re doing one at all. Most of the United players seemingly downed tools about six weeks ago, coasting to a mediocre league finish well short of the Champions League places.

These lavishly-paid stars have never warmed to the methods of Ralf Rangnick, knowing him to be little more than a stop-gap, and one-by-one their targets for the season have slipped away.

United need to win all three of their remaining games to merely equal their lowest Premier League points total – another sign of how the mighty have fallen as rivals Liverpool and Man City inspire one another to new heights.

Little wonder the green and gold protests against the club’s deeply unpopular American owners – the Glazer family – have started up again.

Instead of boycotting the first 17 minutes – one to mark every year the Glazers have been in charge – as has happened at previous matches, the plan on Monday night is to leave 17 minutes early.

It’s a stark contrast from years gone by, when United’s stars would parade trophies they’d won

United sit a lowly sixth in the Premier League table, with eight points to make up on Arsenal

That means the players face the prospect of applauding mostly empty stands as they walk round. This may be preferable to copping earfuls of abuse as fans vent their frustrations.

United, though, are in a tricky situation. For the players not to go round and applaud the fans would be disrespectful to the thousands who follow the team home and away, at great personal expense.

Despite everything, United’s average home attendance for league games this season is 73,132. Away ends sell out without fail. Over 40,000 have already bought tickets for next week’s FA Youth Cup final at Old Trafford.

The other thing is the sheer number of players who could be playing at Old Trafford for the last time. Some we definitely know are departing this summer, others will be reliant on Erik ten Hag’s judgement.

The likes of Juan Mata and Nemanja Matic certainly deserve the chance to say farewell. Although their time at United hasn’t replicated the success they enjoyed previously at Chelsea, both have been fully committed to the cause.

Mata, 34, has been limited to a mere 236 minutes of football this season, which must have been a real frustration given he’s been fit, willing and able.

You imagine the Spaniard could still do a job for someone for a couple of years and there will be interest in him once the summer window opens.

The players have never bought into Ralf Rangnick’s ideas, knowing he is a stop-gap coach

A highly likeable guy with a terrific social conscience, Mata hasn’t had the opportunity to experience winning the Premier League with United but deserves a warm send-off from the fans.

Matic, 33, has featured more frequently this season. Signed by Jose Mourinho from his old club in 2017, the Serbian’s time at United has coincided exactly with their five-year trophy drought.

He has been a solid enough performer in their midfield, usually a reliable presence rather than sensational, and perhaps deserved a medal or two to show for his efforts.

Like Mata, he will no doubt find his way to another club at a decent level to see out his playing days after deciding to leave a year before his deal ends.

United fans also thought they’d be saying bye to Jesse Lingard but now it appears Ten Hag will try and tempt him to stay.

But will Lingard fall for it? He’s started only four games for United this season, making it all the more pointless that he wasn’t allowed to go out on loan back in January.

Presumably he was made some assurances by Rangnick about his game time, having seen his career revitalised by regular football at West Ham last season, but it never materialised.

Lingard is 29 and would be well within his rights to snub Ten Hag and begin a new chapter in his career. Surely the emotional bonds that have tied him to United for so long have now frayed?

So this will probably be goodbye for Lingard but we can’t be entirely sure.

It certainly will be for Edinson Cavani, if he’s even there. United fans have lost patience with the Uruguayan striker picking up injury niggles that preclude him from club games but not from international duty.

He’s not been seen since Rangnick threw him on for the final 15 minutes of the Champions League defeat to Atletico Madrid, returning from World Cup qualifiers in South America with a calf problem.

Cavani was becoming an Old Trafford cult hero at one stage but if he is fit and available for the Brentford game, there’s unlikely to be much beyond a murmur of acknowledgement.

Then there’s all those players who could be on their way out, depending on how sweeping Ten Hag’s first summer overhaul is.

Rumours abound – Eric Bailly, Aaron Wan-Bissaka, Phil Jones and Dean Henderson could all be moving on in the summer.

Jones, one of just three in the United dressing room who know how it feels to win the Premier League with the club, will surely get a warm reception but we don’t know whether he’s going or not.

Then there’s some of the bigger names. Paul Pogba will miss the game – and the rest of the season – with a calf muscle injury.

It remains to be seen whether he joins his team-mates for the lap of appreciation but given he was jeered and subjected to chants of ‘f*** off Pogba’ when he went off during the Norwich win, you’d understand if he didn’t.

After six years of underwhelming performances since United shelled out a world record £89million to bring him back, you can’t imagine too many tears will be shed when he leaves.

Ronaldo has at least another year left on his contract but will he want Champions League football next season?

And then there’s Cristiano Ronaldo. He has another year left on his contract but is 37 and you wonder how much appetite he has for the Europa League in the twilight of his career.

He can certainly still perform, as shown by 23 goals this season in what is clearly an under-performing United side. Things would certainly be substantially worse without him.

Yet finding a taker for Ronaldo’s £500,000-a-week wages at his age could prove easier said than done and United won’t want to part ways so soon. They’ll hope it isn’t Ronaldo’s Old Trafford curtain call on Monday night.

As the players troop round post-match on Monday, there’s likely to be some applause and some anger. But apathy will be the main emotion.