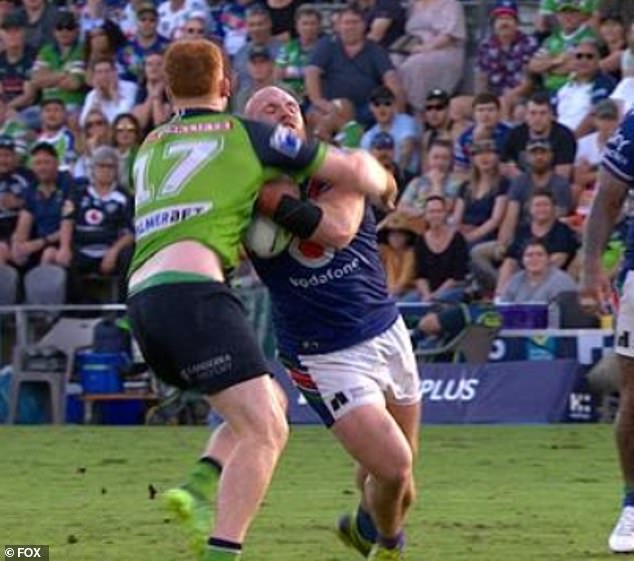 Matt Lodge owned up to breaking one of the cornerstones of rugby league’s code of honour by taking a dive to earn a crucial penalty in the Warriors’ win over Canberra on Saturday, it has been reported.

The prop was roundly condemned for milking a penalty when he was tackled by Corey Horsburgh in front of the posts with two minutes left and the Raiders leading 20-18.

Lodge responded to the harmless hit by staying down and holding his jaw until the bunker had a look and told referee Chris Butler to blow the whistle, even though Horsburgh hit him on his forearm before sliding up towards his head.

The Warriors kicked a penalty to take the game into golden point and won when Shaun Johnson slotted a field goal.

‘Matt Lodge took a dive that decided the football game. He told people after the match that he hated doing it but it won them the game, they got a penalty from the dive,’ Rothfield told 2KY’s Big Sports Breakfast.

‘We had a game of rugby league decided, two competition points, by a dive.’

Brent Tate was angered by the bunker’s call as he commentated on the game.

Horsburgh’s tackle had nothing on this shocking forearm hit Lodge put on Corey Harawira-Naera, for which he’s been fined $1,000

‘I can’t believe it was a penalty,’ he said. ‘I don’t know what to say, to be honest. It just was not a penalty at all, it was a very soft one.’

Lodge was also slammed for another incident in the game when he was lucky to stay on the field after hitting Raiders forward Corey Harawira-Naera in the face with his forearm while carrying the ball.

He was hit with a $1,000 fine by the NRL for the foul after being charged with grade-one dangerous contact.

‘Matt Lodge elbows a bloke in the head, and just gets penalised, then lies down after getting a little tap on the forward and draws the penalty that draws the game and gives them a chance to win,’ NSW Blues coach Brad Fittler told Channel Nine’s Sunday Footy Show.