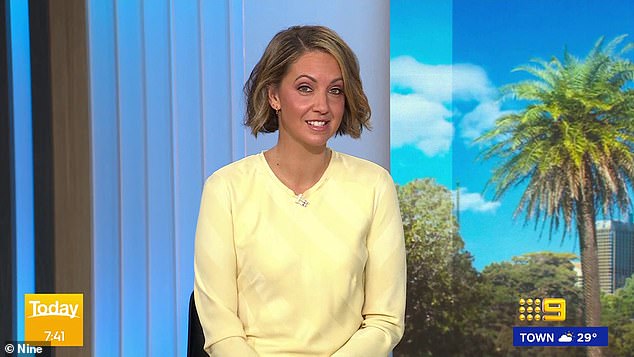 Boney, 34, was presenting a segment on the celebrity arrivals when she suddenly became tongue-tied while discussing the theme of this year’s event.

Whoops! Today’s entertainment reporter Brooke Boney suffered a gaffe on Tuesday when she became tongue-tied while talking about the theme of 2022 Met Gala

‘Guys, it is only half an hour away. The Met Gala! I am very, very excited about this,’ she began her segment.

‘It is considered the Oscars for the fashion world, and celebrities are just starting to arrive in New York for the 2022 Met Gala,’ she added, prompting host Karl Stefanovic to ask: ‘What’s the theme?’

All that glitters: This year’s theme, Gilded Glamour, highlights a period of flashy materialism in 1870s America associated with the prominent New York high society scene. (Pictured: Blake Lively arriving at the Met Gala at The Metropolitan Museum of Art in NYC on Monday)

‘So, Queen Marie Antoinette. That sort of thing?’ Stefanovic asked.

The Metropolitan Museum of Art Costume Institute Benefit, also known as the Met Gala, is considered by many to be the ‘Super Bowl of celebrity red carpets’.

She’s back! Vogue editor-in-chief Anna Wintour (pictured at Monday’s Met Gala) is once again supervising the benefit as chairwoman, a position she has held since 1995

Vogue editor-in-chief Anna Wintour is once again supervising the benefit as chairwoman, a position she has held since 1995. Her fellow honorary co-chairs are designer Tom Ford and Instagram head Adam Mosseri.