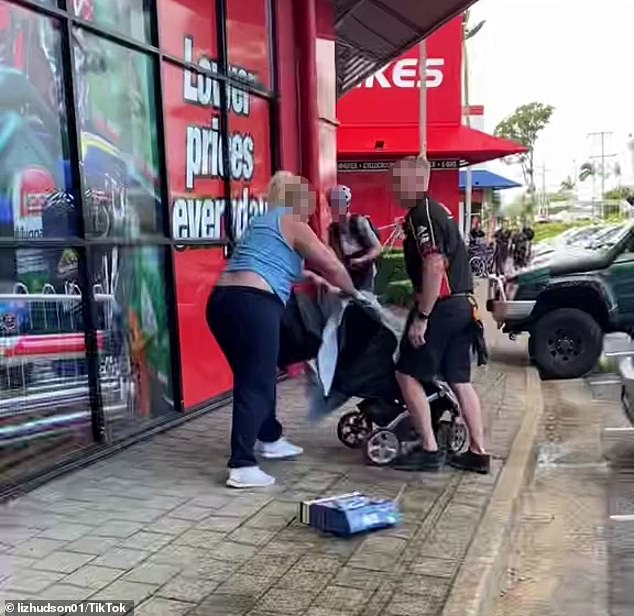 The great escape: How woman accused of shoplifting with a ‘fake baby in a pram’ DID manage to flee – as new video emerges

By Tita Smith and Olivia Day For Daily Mail Australia

Fresh details have emerged about the showdown between a fed-up shop assistant and a woman who was allegedly caught using an empty child’s pram to steal from his store.

Viral footage circulating online shows the worker confronting the woman outside Super Cheap Auto in Ashmore, in the Gold Coast, last week after she allegedly tried to flee with a series of items stashed in the pram.

As the employee grabbed hold of the pram, the woman was heard screaming dramatically screaming ‘let my baby go’ before allegedly stolen items fell from its blanket-covered carriage.

Now, a new video shared on social media on Monday shows the final moments of the incident, after the employee managed to recover some of the allegedly nabbed goods.

The new clip shows the embattled employee standing in front of her pram, trying to prevent the woman from leaving the scene.

But the woman barges him out of the way and storms off down the carpark, away from the automotive supplies store.

A witness, who was at the shop getting her windscreen wipers serviced, said staff allegedly saw her stealing on their cameras inside the store.

The eyewitness claimed to Daily Mail Australia that the woman had three disc brake rotors in her possession. They are valued at around $82.99 each.

‘I heard the yelling before I saw them and just started filming,’ the witness said.

‘The worker was ok, he was angry more than anything.’

The bystander claimed staff recovered two rotors and believe the woman got away with a third hidden under the pram.

The Queensland Police Service said detectives are unaware of any complaints made about the incident.

The woman allegedly stole several disc break rotors (pictured) , which are valued around $82 each

The first video posted on social media on Sunday shows the woman tightly gripping her decoy pram, pretending there’s a baby inside, as she bickers with the employee.

The employee is heard threatening to ‘call the cops’ if she doesn’t return the allegedly stolen items as the woman tries to move the stroller out of his reach.

‘Let my baby go,’ she screams as the man takes hold of its handles and looks inside.

‘You haven’t even got a baby in there,’ the man calmly replies.

‘Don’t touch my baby,’ the woman screams again as the employee notices a box stowed inside the pram which has been craftily covered with a blanket.

‘Oh there’s a box in there!’ the man cries in mock surprise.

The woman then seemingly gives up on her ploy and tells the retail assistant he can have ‘the f***ing motor’.

She pushes a large cardboard box out of the pram and onto the pavement for the man to collect before finally calling him a ‘f***head’.

Dozens of social media users flocked to the comments to share their thoughts.

‘Leave my baby alone. Out thumps a brake disc. F***ing howler,’ one said.

‘No baby in there,’ another commented.

‘Ahhh the ol’ cover the baby in the pram routine,’ a third said.