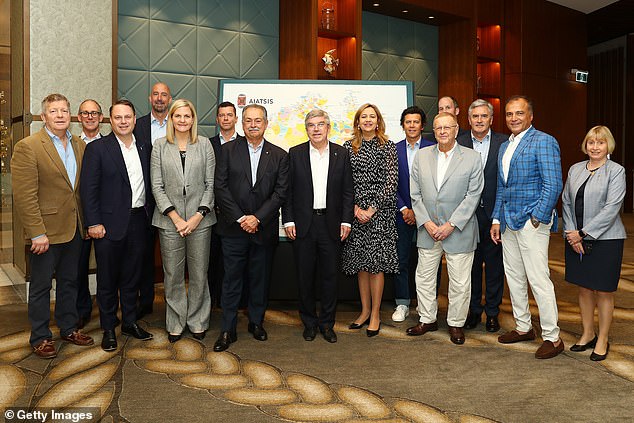 Annastacia Palaszczuk is slammed for taking her BOYFRIEND to a key Olympics meeting: ‘Not appropriate’

Annastacia Palaszczuk has faced backlash after she unexpectedly invited her boyfriend to a key meeting with the International Olympic Committee and Brisbane Olympics organisers.

The Queensland premier’s partner, surgeon Reza Adib, joined the premier for the meeting at the Solotel in Sydney on Sunday.

Questions have been raised as to why Dr Adib tagged along in the first place, with the Deputy Opposition Leader Jarrod Bleijie describing the scenario as ‘weird’ and ‘not appropriate’.

‘I’ve just got to say, it’s just a bit weird, the whole thing is weird,’ Mr Bleijie said on Monday at a press conference. ‘No one else had their partners at the meeting.’

‘It was a properly-prepared, formal meeting with very important people and the Premier’s boyfriend was at the table.’

‘So I’m just saying, I looked at it, and I just think, why was the Premier’s boyfriend granted a position at the table? He shouldn’t have been there.’

A spokesperson for the premier downplayed the serious nature of the Olympics meeting, stating it was simply an ‘informal catch-up’.

The Courier Mail has revealed that Dr Adib’s name was not included on an official attendee list for the meeting.

Sunday’s meeting saw an official slogan for the Games unveiled, which was agreed upon between officials.

IOC President Thomas Bach told the press the slogan was ‘Have a go!’

Both Ms Palaszcsuk and Dr Adib can be seen speaking and posing for photos with officials and executives. The Courier Mail has revealed that Dr Adib’s name was not included on an official attendee list for the meeting

Queensland Premier Annastacia Palaszczuk is dating the multi-millionaire Brisbane doctor, who specialises in weight loss surgery. Ms Palaszczuk was pictured with Dr Reza Adib at the Caloundra Cup at the Sunshine Coast Turf Club on July 11 (above)

News of the Queensland Premier’s relationship with Mr Adib was only revealed last year.

Ms Palaszczuk confirmed the relationship with The Courier-Mail in September, describing him as a ‘very warm and caring, intelligent man with a great sense of humour’.

Political sources said the pair’s relationship had only blossomed in the preceding months.

Ms Palaszczuk was first pictured with the dashing Dr Adib at the Caloundra Cup at the Sunshine Coast Turf Club on July 11 last year, leading to speculation the pair were romantically linked.

In one photograph, the father of two had his arm around the smiling premier as she leaned in towards him on the course rail. In another they were seated together at a table inside.

The Premier has previously said her personal life had fallen by the wayside as a result of her political career and that her busy schedule made looking for love almost impossible.