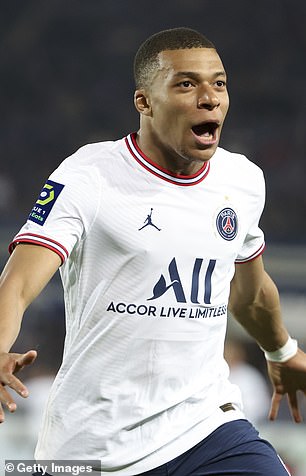 ‘It might be true’: Real Madrid chief Florentino Perez gives the biggest hint yet that Kylian Mbappe is on his way to the Bernabeu… as Carlo Ancelotti drops another cryptic clue about the PSG star by saying ‘the future is already written’

Real Madrid president Florentino Perez has given the biggest hint yet that Kylian Mbappe will become their latest Galactico this summer – admitting ‘it might be true’ when asked if the French superstar would join them.

World Cup winner Mbappe is set to leave Paris on a free transfer this summer if the Parisiens cannot agree a list-ditch contract renewal with the French superstar, and Los Blancos are the strong favourites to pounce for his signature.

Last week PSG boss Mauricio Pochettino stuck his neck out by claiming the 23-year-old would ‘100 per cent’ be staying with the club next season, but Real Madrid manager Carlo Ancelotti responded to his comments by saying ‘coaches cannot tell the whole truth’.

Ancelotti’s men were celebrating this weekend after clinching their 35th LaLiga title by thumping Espanyol 4-0, and both Ancelotti and Perez answered speculation linking them to Mbappe as they soaked up their title glory on the pitch.

‘I hadn’t thought about it [Mbappe] but now that you mention it, it might be true and so on,’ he said when asked about the possibility of Mbappe joining their ranks via Goal. ‘When we plan next year’s squad, we’ll see.’

Ancelotti has been doing nothing to deny the rumours surrounding Mbappe and added even more fuel to the fire this weekend when quizzed on the player himself.

‘Mbappe to Real Madrid? With this club, with this president, the future is already written,’ he said.

When Perez was asked about Mbappe joining Madrid, he admitted: ‘It might be true’

But when asked if his words were a confirmation of Mbappe signing for Madrid, he added: ‘I didn’t say that.’

It follows an exchange between Pochettino and Ancelotti last week, highlighting tensions between both clubs with Mbappe facing a big decision this summer.

Pochettino had been confident that the player would make a stunning U-turn and stay with them, and also believes he will be in charge next season too.

‘There haven’t been any concrete talks, beyond what is normal in terms of our plans and what we have been doing so far.’

When Ancelotti was asked about Pochettino’s comments ahead of Madrid’s clash against Espanyol this weekend, he hinted that Mbappe’s future might not be so certain after all.

‘Coaches at a press conference can’t tell the whole truth,’ the Italian said.

PSG chief Leonardo has been left bemused by Madrid’s confidence that Mbappe will become their player, saying last month that the LaLiga giants were ‘a little too sure’ that he would join them.

‘In Madrid, they’ve been convinced for three years that Kylian Mbappe would end up at Real Madrid,’ he said. ‘Maybe they’re a little too sure about that?’