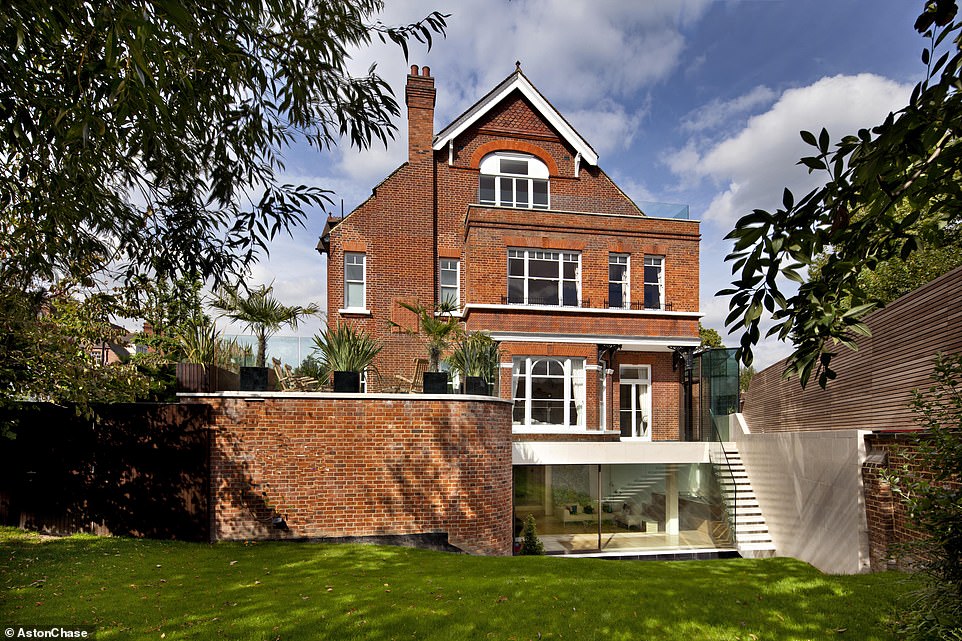 The Apprentice mansion where candidates escaped Lord Sugar’s wrath during filming for the BBC series is on the market for £16.5 million – and comes with six bedrooms, a cinema and a steam room.

Victory House in Hampstead, north London, was used by the aspiring entrepreneurs to relax between challenges during filming for the 2016 series of the hit BBC show.

Across its four floors, the 10,409 sq ft home boasts its own private wellness centre with an indoor spa pool and an outdoor reflection pool.

Built in 1882, the property is up for sale following a seven-year ‘restoration and modernisation’ project and also features four reception rooms, a cinema and steam room across its five floors.

The mansion provides accommodation over the garden, ground and two upper floors, with a large hall on the ground floor giving access to the main drawing room with a deep bay, family room and formal dining room.

The rear of the property in Hampstead, north London, showing the landscaped garden and floor to ceiling glazing that provides access to the ‘garden room’

The interior of the garden room, adjacent to an outdoor pool, which doubles as a relaxation area and a room used to entertain a large number of guests

Victory House has its own wellness suite that comes with an indoor spa pool (pictured), a steam room and two changing rooms

The cinema room on the first floor of the property comes with a huge 2.8-metre screen, while it can also be used as a sixth bedroom

A large hall on the ground floor gives access to the property’s drawing room (pictured) which features a deep bay, family room and a formal dining room

A large family kitchen and breakfast area which is fitted with bespoke units, including a large walnut wood topped central island

Victory House was used by candidates between challenges during filming for the 2016 series of the BBC’s The Apprentice, eventually won by Alana Spencer

On the garden floor is a 50ft ‘garden room’ which doubles as a relaxation and party room, with huge floor-to-ceiling glazing providing access to the rear of the property.

Adjoining the garden room is the air-conditioned gym accompanied by a steam room and twin changing rooms.

On the ground floor is a studio flat that comes with its own open-plan kitchen-living area, bedroom and shower room. This is located immediately behind the family kitchen.

Moving up, the main bedroom is found on the first floor with a bathroom that contains a freestanding sculptural bath, walk-in shower and walk-in dressing room.

There are two further bedrooms on the first floor along with the cinema room, that can also be used as a sixth bedroom, boasting a 2.8-metre screen.

Each bathroom has hand-carved stone basins cut from the same slab as the flooring and freestanding baths.

To the front of the property, is a west facing topiary garden, while the main south facing garden to the rear comes with a sweeping lawn, mature trees and planting.

Stairs lead up to a large terrace located off the drawing room, while a reflection pool borders the lower garden room.

The front of the property, which was used by contestants during the 2016 and 2018 versions of the BBC’s hit show The Apprentice

The principal bedroom, located on the first floor, comes equipped with a freestanding sculptural bath, a walk-in shower and a walk-in dressing room

Victory House in on the market with joint sole agents Aston Chase and Savills.

Mark Pollack, co-founding director of Aston Chase said: ‘Victory House is one of the finest residences on the southern slopes of Hampstead and is superbly located for thriving Belsize Village which, during the pandemic, has become a hugely valued amenity for local residents.

‘The house is also situated only three minutes from the highly regarded South Hampstead High School in addition to numerous other excellent private schools.

‘The house represents an outstanding opportunity for anyone looking to buy a substantial lateral family home only moments from St John’s Wood and Primrose Hill, yet arguably representing better value for money.’

Stephen Lindsay, head of office, residential at Savills, added: ‘Victory House has been refurbished and finished to a superlative level of quality, with bespoke craftsmanship and the highest quality stone, wood and glasswork used throughout.

‘After seven years of restoration the Victorian grandeur of this large house has been embellished with flair and imagination to create a stunning 21st century Hampstead home of exceptional quality and style.’