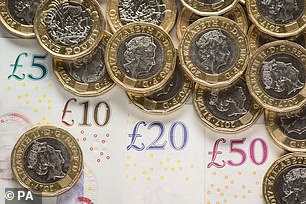 Six year high: In the UK, the yield on benchmark ten-year gilts was close to 2%

The cost of government borrowing has jumped as central banks around the world prepare to increase interest rates to step up their battle against inflation.

Government bond yields – a key measure of how much it costs countries to borrow – are hovering around multi-year highs. In the UK, the yield on benchmark ten-year gilts was close to 2 per cent, its highest level for six years.

In the United States, the equivalent yield on ten-year treasuries topped 3 per cent – a level not seen since 2018 – before easing.

The rise in borrowing costs comes as central banks put up interest rates to tackle inflation.

The Reserve Bank of Australia raised rates yesterday for the first time in more than a decade.

In the US, the Federal Reserve is tipped to raise rates US by 0.5 percentage points today in what would be the biggest increase since 2000.

And the Bank of England is expected to raise rates in the UK to 1pc tomorrow – the highest level since 2009.

The Bank has already raised rates three times since December, taking them from 0.1 per cent to 0.75 per cent.