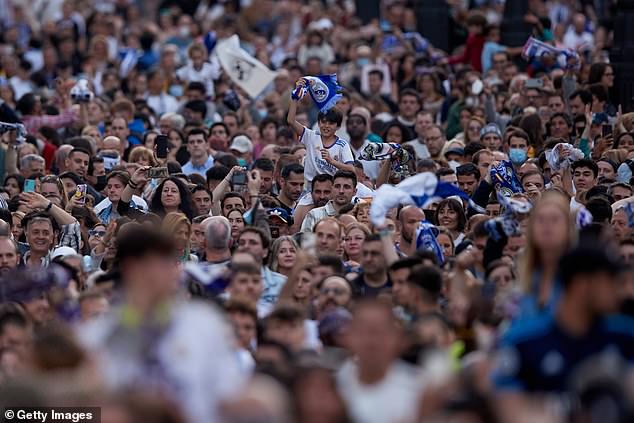 If you happen to be in the Chamartin district of Madrid tonight at about 6pm local time and you have no interest in football, whatever you do, don’t got out for a carton of milk thinking to yourself: “I know there’s a game on but it’s not for three hours yet”.

For around ten thousand Real Madrid supporters, the game starts when the clocks in Madrid chime six, not nine. That’s when they fill every last meter of pavement around the Sagrados Corazones roundabout just outside the stadium and most of the adjoining streets to welcome the team bus as it crawls towards the ground.

The biggest picture inside Wednesday morning’s Marca was not of a player or a famous Madrid Champions League goal, it was of the team making its way through the hoards in a blur of flares and flags towards the stadium.

Some will not have been able to afford tickets for the game but will still pack in behind the temporary security railings as several police horses lead the Real Madrid coach through the streets.

Some wait for up to two hours to get a glimpse of the bus and can then see no more than their own reflection because of the tinted windows but they feel it’s the first goal scored in the game: if what the players see and hear cranks up their desire and belief they have done their part.

Hanging off lampposts with Madrid shirts on and straining to see if there is any sign of movement in the distance the supporters begin to sing about the club’s great European nights and on evening such as these when a comeback is needed you’ll hear the ‘Si se puede’ (yes we can) too.

Those cries of yes we can were muted at first in the hours before the PSG game in the last 16 – why wouldn’t they be when the team was 1-0 down from the first leg and up against Lionel Messi, Kylian Mbappe and Neymar. But they rose to a crescendo as the coach pulled in.

When PSG scored first far from flatlining, the atmosphere spiked and Karim Benzema’s 17 minute hat-trick seemed to be connected to the extraordinary noise levels inside the Bernabeu, like an amp to the mains. In moments like that there is an inevitability about the next goal and the next. Madrid know it’s coming and the opposition too but they can do nothing about it.

At Madrid at least the press box is reasonably restrained. Not so at the Camp Nou. When Barcelona beat PSG 6-1 in 2017 to overturn a first leg 4-0 drubbing French reporters confronted Barcelona reporters who were clearly also Barcelona supporters for their reactions as the goals flew in.

There are few non-partisan reporters following the club and it never showed as much as it did that night. The noise for Sergio Roberto’s 95th minute winner, and for Benzema’s third goal against PSG almost registered on the Richter scale.

The City team bus tonight will be spared having to cut a path through the thousands welcoming Madrid. They take the high road and come into the arena from another direction, far from the madding Madrid crowd. It’s how they react to the atmosphere inside the stadium if Madrid score that will go some way in deciding if they win the tie. And there some statistics that suggest home advantage might not be enough.

Carlo Ancelotti’s team have been dubbed ‘Miracle Madrid’ after the epic way they resuscitated against PSG and Chelsea and they are the comeback kings in this season’s Champions League with a longer history full of fight backs there is one thing that has always proved beyond them: reach a European Cup final after losing the first leg of the semifinal.

If they do go through it will be the first time in the club’s history they have overturned a first leg deficit in a semi-final.

The record goes back 54 years to 1968 against Manchester United when they lost 1-0 at Old Trafford to a George Best goal and could then only draw 3-3 at the Bernabeu going out to the eventual winners.

And in the modern Champions League era they have fared no better.

In 2001 Bayern Munich beat them 1-0 home and 2-1 away. And in 2011 with Jose Mourinho now in charge they lost 2-0 at home to Barcelona and drew 1-1 in the Camp Nou. A year later they lost 2-1 away to Bayern and then went out on penalties after the second leg finished 2-1 in their favour.

In 2013 Jurgen Klopp’s Dortmund thrashed the team still coached by Mourinho 4-1 in Germany and Madrid could only win 2-0 at home.

The last time it happened was in 2014 with Carlo Ancelotti in charge. They lost 2-1 to Juventus away and could only draw 1-1 at home.

All this hasn’t stopped a wave of belief sweeping through the Spanish capital pre-match and both Luka Modric and Ancelotti talked up the potential effect that raucous home support might have.

Supporters were singing: ‘yes we can’, during Saturday’s La Liga celebrations and Modric said: ‘I hope our fans,’ and then he stopped and corrected himself, ‘I’m sure our fans, will be behind us as they always are in the big games.’