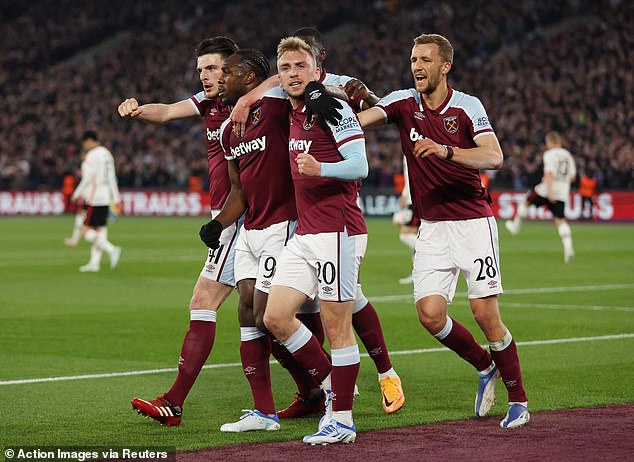 As if David Moyes needed any further reminders of what happened 46 years ago, it was raining as West Ham’s manager held court at Eintracht Frankfurt’s Deutsche Bank Park on Wednesday.

Another nod to that famously soggy night in 1976 when they beat these German opponents 3-1 to reach the final of the European Cup Winners’ Cup, overturning a 2-1 first-leg loss.

Yet Moyes was not in the mood for reminiscing about the good, old days at his pre-match press conference. Instead the 59-year-old wanted to outline why this is the ‘new West Ham’.

A team which wants to inspire its young supporters into getting ‘Bowen’ and ‘Rice’ on the back of their shirts. A side which wants the London Stadium to feel like a home rather than a soulless bowl.

A club on the brink of bigger, better, beautiful things and which is going places – hopefully to the Europa League final in Seville in two weeks’ time.

That depends on Thursday night and whether Moyes’ boys can overturn that disappointing 2-1 loss from last week’s first leg. ‘I don’t want to go back,’ the manager said.

‘I’m trying to give a “new West Ham” because I want people to see a new young team. Jarrod Bowen and Declan Rice are new, young, up-and-coming, huge players who the new young supporters at West Ham can get a jersey and support them. They’re the future for West Ham.

‘As we all know, there were greats like Sir Trevor (Brooking) – all the people of the past who all the older generations talk about. So I’m really hoping that this new generation of supporters will be talking about the likes of Jarrod Bowen and Declan Rice for games like this.

‘To be in a semi-final here with West Ham is huge for us as a football club. I’ve got a great group of players – a group of players who have resilience, character and all those things that go with it. It wasn’t too long ago we were fighting relegation. It’s been a great climb and I see no reason that shouldn’t continue.’

Rice’s future could depend on Thursday night. If West Ham qualify for the Champions League by winning the Europa League, he will stay. If not, he will consider his future in the summer, having already turned down three new contract offers.

Rice is among those who needs to put in a performance of a lifetime on Thursday night. As will Bowen and Craig Dawson – or ‘Arjen Bowen’ and ‘Ballon d’Orson’ as the supporters have taken to calling the two West Ham favourites.

‘It’s a big nickname to be associated with,’ said Bowen, sitting next to Moyes on Wednesday. ‘It’s been strange – from eight years ago when I first played at Hereford to now be in the Europa League semi-final, I’m grateful.

‘It’s about showing what I’m about. This season it was about believing in my abilities and showing it week in, week out with goals and assists.’

He’s done that, and if anyone is to repeat the heroics of two-goal Brooking from 1976, it’s Bowen.

Moyes’ 86-year-old father, David Snr, will be in attendance in Frankfurt on Thursday night, cheering on his son’s team. The West Ham manager said that will be ‘special’ but added: ‘It will be even better if it’s the final.

‘In your career you have lots of ups and downs – probably more downs because it’s hard to be winning the top games all the time. You have to accept that as part of being a manager, but I think when you get so close, you’ve got to hope that it is your turn.’

Maybe it is his turn. Maybe not. It’s all on tonight in Frankfurt.