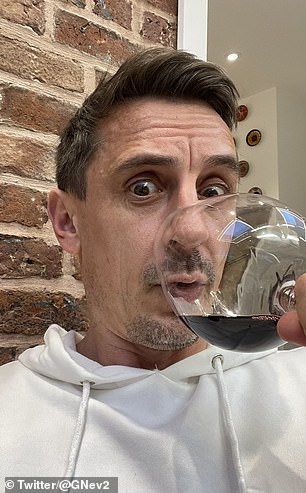 Gary Neville was left red-faced on Tuesday night after an effort to mock Liverpool’s poor start in their Champions League tie at Villarreal spectacularly backfired.

Liverpool looked to already have one foot in another European final, having strolled to a 2-0 first leg lead at Anfield, and were heavy favourites to complete the job in Spain.

But the Reds were left stunned when first-half goals from Boulaye Dia and Francis Coquelin pulled the side from LaLiga level at the break.

Gary Neville could barely contain his delight at half-time (left) as Liverpool fell 2-0 down on the night, but was looking less pleased once full-time came during the European semi-final

Neville, who spent his entire senior career at Liverpool’s bitter rivals Manchester United between 1992 and 2011, could barely contain his delight as he posted a short clip of himself on Twitter trying to hold back his laughter while also looking stunned as he sipped red wine.

Yet a storming second-half comeback from the Reds – thanks to goals from Fabinho, Luis Diaz and Sadio Mane – secured Jurgen Klopp’s side a comfortable win as they reached their third Champions League final in the last five seasons.

After Liverpool’s 5-3 aggregate win, Neville sportingly mocked himself at full-time by following up his earlier tweet with a full-time version of him looking glum in his glass of red.

But Liverpool stormed back in the second half, with Sadio Mane (right) ensuring a comeback win on the night by scoring Liverpool’s third in a 5-2 aggregate victory

Neville’s emotions during a game while holding a glass of wine are not new to his followers on Twitter, as he and Sky Sports colleague and former Liverpool player Jamie Carragher have jokingly shared similar images concerning their teams and their rivals over recent years.

His dejection could increase over the next month as Liverpool’s victory means they remain on course for an unprecedented quadruple – trumping United’s treble winners from 1999 – of which Neville played a key role in.

Klopp’s side have already won the Carabao Cup this term and are involved in a nail-biting title race with Manchester City, as well as being in the final of the Champions League and FA Cup.

Liverpool remain just a point behind City with four games to play in the title race, while they have a Wembley date with Chelsea in the pipeline.

Meanwhile, they will find out who they will play in the Champions League final at the Stade de France in Paris when Real Madrid take on City on Wednesday night.

Pep Guardiola’s side head into the second semi-final at the Bernabeu with a narrow 4-3 advantage.