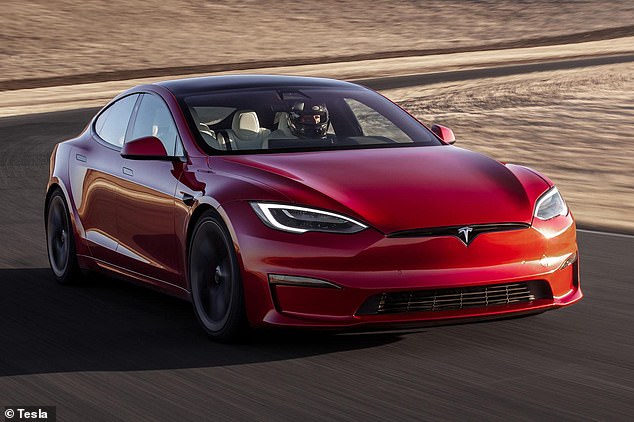 As the richest person on earth, Elon Musk knows a thing or two about making money.

So when he urged budding entrepreneurs to get into the lithium business, eager followers will have taken note.

‘Do you like minting money? Well, the lithium business is for you,’ he said on an earnings call for the electric car giant Tesla last week.

Fuel of the future: Lithium prices have risen six-fold from $12,000 a tonne in 2017 to reach $78,000 this year. This has been fuelled by an explosion in demand for electric vehicles

Despite Tesla racking up profits of £2.5billion in the first three months of the year, lithium is giving Musk a thumping headache.

A global shortage of this crucial battery component has pushed prices to record levels, threatening to put the brakes on growth and dash his dreams of building a more affordable electric car.

So much so that the eccentric tycoon, who has just clinched a deal to buy Twitter for £35billion, has said he may also have to set up his own lithium mining company to secure supply.

It’s not hard to see why.

Lithium prices have risen six-fold from $12,000 a tonne in 2017 to reach $78,000 this year. This has been fuelled by an explosion in demand for electric vehicles, which has caught almost everyone by surprise.

The number of electric cars sold around the world more than doubled last year to 6.6m, according to the International Energy Agency.

And experts predict lithium demand could increase ten-fold by the end of the decade, as more of us get behind the wheel of an electric car.

While Musk clearly has more at stake than most, his concerns are widely shared by car manufacturers, world leaders and environmentalists.

In fact, the race to secure more of this soft, silvery white alkaline metal has become a defining feature of a global race to wean ourselves off fossil fuels and cut carbon emissions to net zero by 2050.

Without a reliable supply of affordable lithium for the big batteries needed in wind turbines and cars, this target appears more fanciful.

China’s stranglehold on the market has not helped matters – it controls more than 80pc of battery cell production, as well as dominant positions in lithium refining and component production.

The war in Ukraine, and Russia’s decision to cut off the gas supply to Poland and Bulgaria, has provided a rude wake-up call to world leaders of the need to reduce their reliance on hostile nations for vital resources.

Minting money: Tesla tycoon Elon Musk said he may also have to set up his own lithium mining company to secure supply

The lithium problem has been deemed pressing enough for US President Joe Biden to invoke emergency powers to ramp up production of key battery materials, including lithium, nickel and cobalt under the Defense Production Act, established by Harry Truman during the Cold War.

The goal, according to the White House, is ‘reducing our reliance on China and other countries for the minerals and materials that will power our clean energy future’. But Biden’s decision to pull troops out of Afghanistan, and cede control to the Taliban, could become a spectacular own goal in this regard.

For Afghanistan is sitting on an estimated $1trillion of mineral deposits, including what could be the world’s largest lithium reserves.

Taliban warlords have been meeting Chinese mining bosses, who are eyeing up the lithium stash hungrily.

Any deal between Beijing and Kabul would not go down well in the White House – or indeed in Downing Street.

Lithium is a relatively common element, so there is enough of it to go around.

The problem is that not enough of it is being mined. In part, this is because it is difficult, expensive and time consuming to extract.

New mines can take up to a decade to establish and until very recently we did not need such vast quantities of it.

The metal is generally found in deposits of clay, in mineral ore or underground pockets of water. Extracting it typically involves two methods.

One is building a mine, extracting the clay or ore, and separating the metal through a complex process.

The second is to pump underground water deposits to the surface. The resulting pools of briny liquid are left to evaporate, and lithium is removed from the dried salts.

Most lithium is mined in Chile and Australia, then exported to China to be processed.

The biggest lithium mine is Greenbushes, which takes its name from the neighbouring small timber and mining town in Western Australia, around 150 miles south of Perth.

But companies around the world are rushing to develop new mines.

Having had permits for a huge mine revoked by the Serbian government, last month Anglo-Australian giant Rio Tinto completed the acquisition of its Rincon lithium project in the Salta Province of Argentina.

But work is also well underway to tap into the UK’s own lithium riches, albeit on a more modest scale.

Two companies in Cornwall, British Lithium and Cornish Lithium, both backed by millions in Government grants, are racing to extract lithium buried in the granite.

Prime Minister Boris Johnson has described the holiday hotspot and the land of Poldark as the ‘Klondike of lithium’, referring to the Klondike gold rush in Canada in the late 1800s.

Cornish Lithium’s founder, Jeremy Wrathall, said he agreed with Musk’s plea for more people to get into the lithium businessm, adding: ‘It has been described as an arms race – and it absolutely is.

‘We are witnessing a total industrial revolution.

‘The sheer scale of adoption of electric vehicles has taken everyone by surprise and it’s brought forward the huge imperative to develop stable secure supply chains.

‘One problem is people have said lithium is an abundant element. This is a red herring and has created complacency. Yes, lithium is abundant – it is technically everywhere and is probably in my garden. But to find sufficiently high concentrations of it is extremely rare, particularly in Europe.’