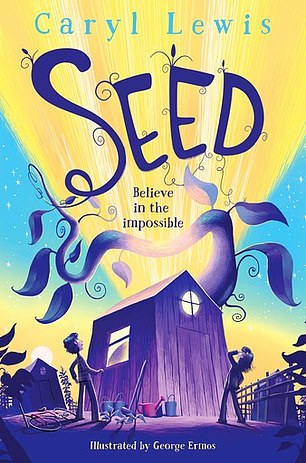 By Sally Morris for the Daily Mail

Bullied only child Marty lives with his hoarder single mother who has mental health problems, so he finds sanctuary with his impractical but effervescently imaginative Grandad on his allotment. Marty’s only friend is the ebullient, deaf, equally lonely Gracie.

Will Marty finally see beyond his problems and believe in himself? An absolute treat. 8+

SKANDAR AND THE UNICORN THIEF

Hands up who loves unicorns? Hmmm. If you’re thinking rainbows and sparkles, this dramatic debut will come as a shock. Skandar Smith, 13, dreams of being a unicorn rider, an elite band of teenagers on a secretive island where dangerous unicorns are tamed only when matched with a chosen child.

After missing the crucial exam, Skandar is shocked to be taken by a mysterious stranger to the island, where he’s thrust into a dark, violent world. He discovers a secret about himself that could cost him and his three new friends their lives… 9+

Callie, Ted, Zara and Nico are in their last year at primary school — but Ted is badly bullied by teachers and pupils for being small and timid. When a particularly cruel trick humiliates him, he shuts himself off from his friends and watches from a tree while they break into the school for a dare.

There they discover Billy, one of Ted’s tormentors, who is having problems at home and is sleeping at the school. Ted assumes they’ve befriended his enemy and plots revenge.

A deceptively simple story that packs an emotional punch about loneliness, rejection, friendship and honesty. 9+