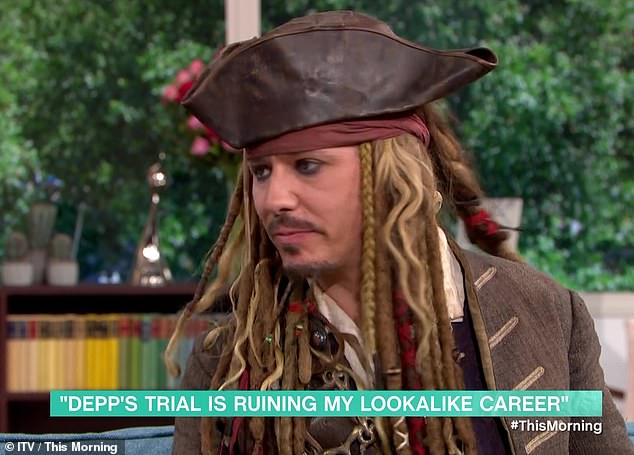 A Jack Sparrow lookalike has revealed how Johnny Depp’s court battle with his ex-wife Amber Heard has affected his career, with him being booked for fewer corporate events because companies worry about their ‘reputation’.

Speaking during a discussion on This Morning with Philip Schofield and Holly Willoughby, Crawley-based Simon Newton, who doubles as the Pirates of the Caribbean star, explained the ramifications of the case for his career.

Depp is suing Heard for $50million, claiming she defamed him and ruined his career after a 2018 Washington Post article in which she described herself as a domestic abuse survivor, but Simon admitted he saw a spike in bookings when the case started.

‘Where it probably affects me more are the big corporate events where people are concerned about their reputation’, he said.

But he’s still being booked for private parties by fans of Jack Sparrow, because they’re able to separate the character from the actor.

Simon Newton, from Crawley, who doubles as a Jack Sparrow lookalike, pictured, said in a discussion with Holly and Phil on This Morning that the latest Depp v Heard trial has had an impact on his bookings for corporate events

But the lookalike, pictured speaking to Holly and Phil, said that he is ‘quite lucky’ to a degree because there is a separation and a disconnect to playing a character like Jack Sparrow

Simon said: ‘I remember when the first Sun article came out I was doing some walkabout acting at a town centre somewhere,’ he said.

‘It was all quite lighthearted but you do get the occasional comment like “Beat your wife as well, do you?”.

But Simon admitted that he is ‘quite lucky’ to a degree because there is a separation and a disconnect to playing a character like Jack Sparrow.

He told Phil and Holly: ‘A lot of my bookings are for private events, parties, that kind of thing.

The group were discussing the Depp v Heard trial after Amber took the stand for the first time yesterday.

Depp is suing ex-wife Heard for defamation because of a newspaper article in which she accused him of domestic violence, but both parties say they were abused by each other.

The group were discussing the Depp v Heard trial, which has seen Depp, pictured in court, sue ex-wife Heard for defamation due to a newspaper article she wrote about him

Heard, pictured in court, took the stand for the first time yesterday. The feud at the centre of the trial is that both parties say they were abused by each other

Simon was a double for Johnny in the fourth Pirates of the Caribbean film and Fantastic Beasts.

When he and Johnny were filming for the third Fantastic Beasts film, he said: ‘One day into filming, when he got fired, so did I.’

In the conversation, Holly asked Simon if he is finding the events and trial ‘a real worry for his career’.

Simon said: ‘So far it has been almost a positive thing because of people’s prior expectations.

Simon, pictured next to Depp as Jack Sparrow, told Holly and Phil that the trial has been more positive than he expected so far because of people’s prior expectations

‘From what people have been telling me it has been a more positive thing.’

Talking of his experiences of meeting the Hollywood star, the lookalike said Johnny is quite quiet, shy and reserved.

He added that he has a quirky sense of humour and Holly and Phil rounded off the discussion.

They both said they hope that the work continues for Simon, who is the only credited UK photo double for Depp.

The lookalike, pictured on This Morning, spoke of meeting Depp, saying he was ‘quite quiet, shy and reserved’ but has a ‘quirky sense of humour’