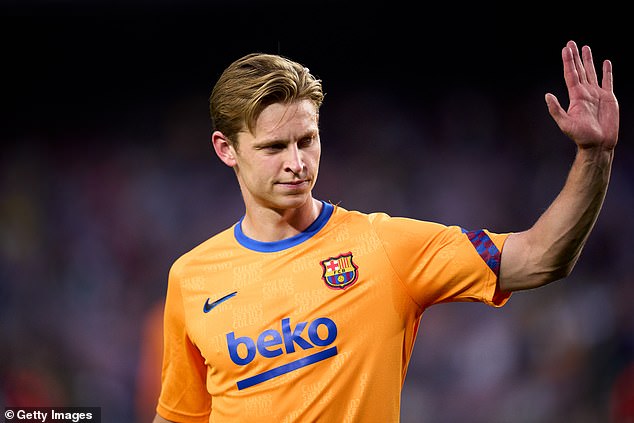 Manchester City have added a central midfielder to their transfer wishlist as they look to refresh parts of Pep Guardiola’s squad this summer.

The Premier League champions are expected to land striker Erling Haaland from Borussia Dortmund to fill a void up front, while Guardiola will run the rule over Argentina forward Julian Alvarez during pre-season.

But the City boss is also looking to capture a midfielder who is capable of operating both in a reserved holding position and in a more advanced role.

Guardiola wanted to sign Frenkie de Jong from Ajax three years ago but the club were beaten to his signature by Barcelona.

They could reignite that interest if Barca are forced to sell the 24-year-old because of their financial constraints. De Jong was close to a move to the Etihad Stadium in 2019 — members of his family had viewed properties in the North West — before eventually choosing the Catalan giants.

Club captain Fernandinho recently confirmed that he is set to leave in the summer, bringing an end to his illustrious nine-year stay.

City are planning to start next season with at least three new faces, with Haaland one of them

Guardiola has generally used five central midfielders for three spots for the majority of the campaign and there is a belief that City need to add numbers in that area of the pitch. There is hope that 19-year-old James McAtee, highly thought of by the coaching staff, may be afforded more game time next season.

Sportsmail revealed in March that Haaland is expected to join City this summer, a signing that would represent a significant statement of intent.

Alvarez, who signed from River Plate for £14.1million in January before remaining there on loan, will have a chance to impress Guardiola. Jesus, a similar forward to Alvarez, is being tracked by Arsenal.

City will now turn their attention to staving off Liverpool in the title race and are back in action against Newcastle on Sunday.

On Wednesday night, there were fears about the fitness of Kyle Walker after the right back hobbled off, while Aymeric Laporte was also seen struggling with a knock in extra time. John Stones missed the game with a muscle problem.