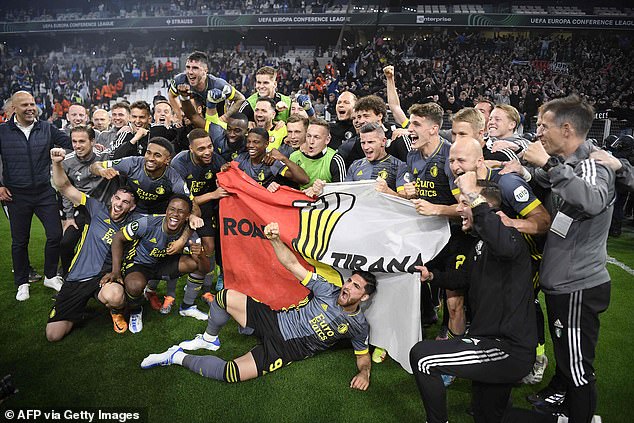 Marseille 0-0 Feyenoord (2-3 agg): Dutch side are through to the Europa Conference League final against Roma after goalless semi-final second-leg against Ligue 1 opponents

Feyenoord are through to a Europa Conference League final against Roma after holding Marseille 0-0 at the Stade Velodrome to advance 3-2 on aggregate.

Marseille, who lost Dimitri Payet to injury in the first half, created a number of chances but were unable to find a breakthrough as Feyenoord secured their first European final appearance since winning the UEFA Cup in 2002.

The Rotterdam outfit will vie with Roma – semi-final victors over Leicester – to become the inaugural winners of this competition in Tirana on May 25.

The opening stages of the contest saw Payet to the fore, with the former West Ham man having one shot blocked by Marcos Senesi and curling another just off-target.

Marseille were then dealt a blow around the half-hour mark as Payet sustained an injury while delivering a pass and had to be substituted.

He was replaced by Arkadiusz Milik, who sent a header into Ofir Marciano’s arms soon after, before a Guus Til shot deflected wide at the other end, Feyenoord’s first real attempt on goal.

The away side finished the half fairly strongly, while Milik saw another header caught by Marciano just prior to the break.

Marseille’s Valentin Rongier could only produce a tame shot from a good position 10 minutes into the second half that was easily dealt with by Marciano, before Gernot Trauner went close for Feyenoord, sweeping over the bar from the edge of the box.

Cyriel Dessers just failed to get his head to a free-kick into the home box and Pol Lirola then saw a shot diverted wide as OM’s attempts to save themselves proved in vain.

Feyenoord substitute Alireza Jahanbakhsh subsequently brought a save out of Steve Mandanda in stoppage time before the final whistle confirmed Arne Slot’s men as heading to Albania.