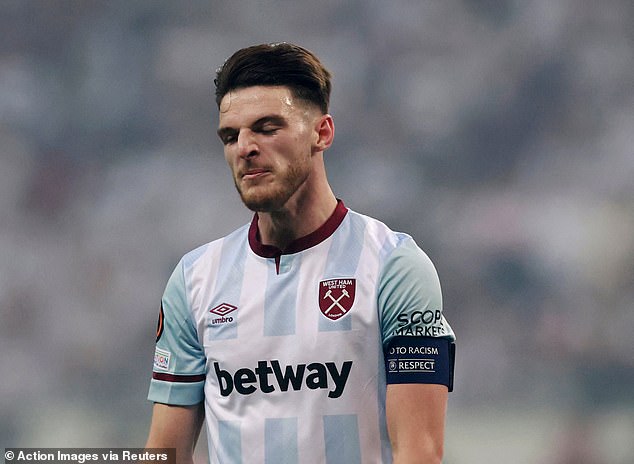 Without wishing to pour a salt mine into a gaping wound, it’s time to talk about Declan Rice.

It’s time to discuss whether his departure comes with this defeat. Whether his head is turned by those suitors this summer. Whether that’s the cost of West Ham’s failure to secure Champions League football by winning the Europa League.

Rice so badly wanted to represent this club in Europe’s elite competition. He was beating his chest after Aaron Cresswell’s early red card, doing his best to encourage his team-mates into believing all was not lost at Eintracht Frankfurt’s Deutsche Bank Park.

It was, unfortunately, and West Ham may well lose Rice after this, too. What awaits is a summer of speculation, news reports, social media rumours and, most worryingly, bids landing in their inbox.

Rice has turned down three new deals from West Ham – the latest one apparently worth £200,000 a week. He’s contracted until 2024, and the club can extend that to 2025, but here in Frankfurt, they lost their most crucial bargaining chip – the ability to offer him the biggest stage to showcase his talents.

West Ham aren’t fools – they know full well that Rice’s future is a hot topic. The club are obligated to put forward a player for every Europa League pre-match press conference but in their last 10 outings, they’ve not used the England international.

But not the armband wearer ahead of any of West Ham’s Europa League knockout ties.

Rice did speak after winning the Premier League Player of the Year at the London Football Awards in March, saying his desire to play in the Champions League was ‘urgent’. That may as well resemble a ‘come and get me’ to Manchester United and company after this.

When the home support is as loud as this – and my word, they were loud, the Frankfurt fans’ whistles piercing your ears when West Ham had possession – you need a cool head in the middle.

Rice is usually that calm character, but even he felt the intensity of this sorry evening, receiving a yellow card from referee Jesus Gil Manzano for yelling in his face.

He didn’t give up, to his credit. From the start of the second half Rice was chasing down lost causes, pressuring the Frankfurt defence into giving up possession, still toiling away.

West Ham needed a hero in Frankfurt but this turned out to be too big of a job on the night. Too big for manager David Moyes. Too big for Jarrod Bowen.

Too big for Rice, whose club feel he is worth at least £150million. Whether that’s a fanciful figure, we’re bound to find out in the summer.