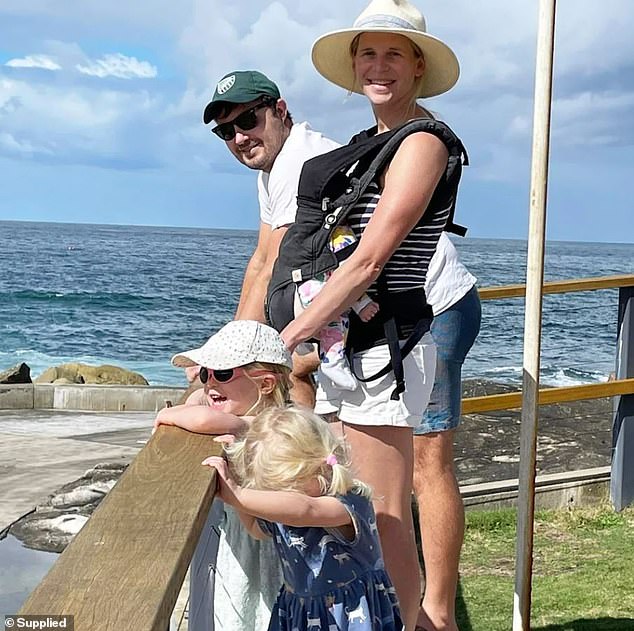 A desperate mother is offering $1000 cash for anyone willing to help take her three children halfway around the world on a gruelling 23-hour intercontinental flight.

Aussie mum Rachel was dreading making the epic Malaysia Airlines flight back from London to Sydney by herself with the youngsters after her brother’s UK wedding.

She decided to offer strangers cold hard cash to make the trip with her and help her out – and has been overwhelmed by the response.

With her husband unable to join her on holiday and her brother refusing the offer of a free holiday, Rachel needed a helping hand with Ivy, 4, Stella, 2, and two-month-old Willow.

The Sydney mum took to social media and expat facebook groups to share her plan in the hope of luring a willing volunteer.

The cash works out to a rate of more than $40 an hour for the around-the-clock undertaking.

‘Anyone heading from London to Sydney who wants to make $1,000??’ she posted before spelling out the responsibilities of the job.

‘It’s a 23.5 hour flight so essentially that’s $42 an hour however I would not expect you to be helping out with the kids for 24 hours straight!’

She said her children had behaved well on the long-haul flight they took to London last year, but without her husband, and with a new baby, she’d need another pair of helping hands to keep her kids in line.

‘Whenever the older girls are asleep you wouldn’t need to do anything and even when they’re awake I am happy for them to watch as much TV as they like so all you might need to do then is make sure headphones don’t fall off, put on next movie etc.’

‘I will also do as much as I can, but I’ll have the baby to look after as well.’

A mother daunted by her long haul Malaysia Airlines flight (pictured) offered $1,000 for the assistance of a fellow passenger in looking after her children

‘The response has been amazing!’ she said. ‘I’m actually quite overwhelmed with how kind and supportive so many strangers have been to me.

‘I originally was canvassing my family to help and offering to pay towards their flight etc but didn’t get any joy.

‘I mentioned it to a friend who said she’d found her nanny through a nanny Facebook group and that lots of people on it would be from Europe.

‘With the childcare experience that could make them good candidates to want to do this, so I posted there.

‘Lots of people responded suggesting other groups I should post in so I joined and posted in every single one, and that’s how it all seemed to take off.’

She’s now narrowing down the applicants to a shortlist before making her final selection.