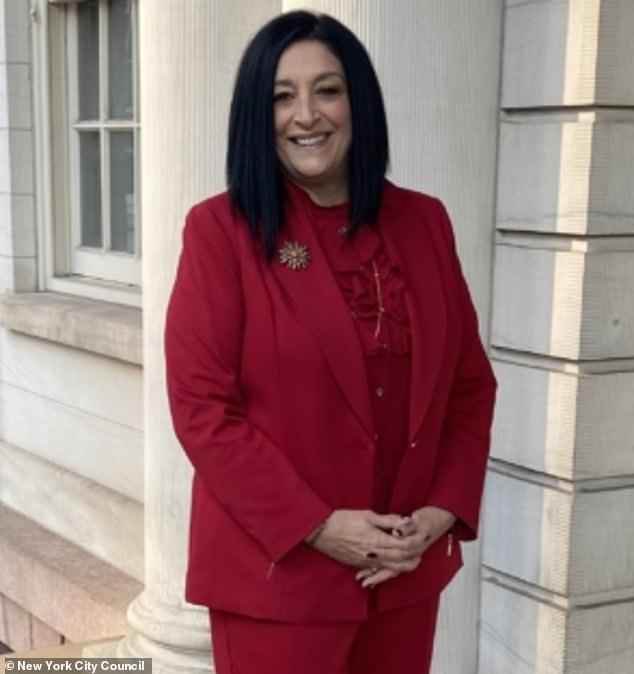 A New York City councilwoman has called on the city to dock former Mayor Bill de Blasio’s $113,000-a-year pension over the funds he blew on misuse of his security detail.

The former mayor, who racked up $2.5 million in debt, has not yet reimbursed taxpayers the nearly $320,000 that the city’s Department of Investigation determined he owes for misusing his NYPD security detail.

‘He absolutely must be held accountable for every dollar he funneled away from the people of New York,’ Republican Councilwoman Joann Ariola told The New York Post on Saturday. ‘Bill de Blasio is not above the law, and his pension should be garnished until the city is repaid.’

The call for docking his $113,131-a-year pension comes after investigators determined de Blasio, 60, wrongfully misused city resources when he took his NYPD security detail with him during his failed presidential run in August 2019.

The investigation revealed the NYPD spent at least $319,794 to guard him while he was out of state on the campaign trail. He utilized his security detail while attending a Boston Red Sox game in California and would ‘occasionally’ have his guards transport his presidential campaign staffers.

He is also accused of having city cops run errands on his behalf, including chauffeuring his son and helping his daughter move.

The former mayor has not yet reimbursed taxpayers the nearly $320,000 that the city’s Department of Investigation determined he owes for misusing his NYPD security detail. De Blasio is pictured during his final mayoral press conference in December 2021

Although de Blasio has appealed the ruling of NYC’s Conflicts of Interest Board (COIB), bi-partisan officials have declared he should be on the hook for the funds.

‘Depending on the findings of the COIB, having the taxpayer money he owes taken out of his pension if he refuses to pay it back is perfectly reasonable,’ said Councilman Robert Holden, a Democrat said.

‘That’s what would happen to anyone else. He should have to pay it back with interest. Bill de Blasio has always acted like the rules don’t apply to him, and it sure hasn’t helped his reputation. Even out of office, he’s still doing it.’

‘Not only would I [dock his pension] if he resists – although it would be likely battled in civil court — I would have the city seize one of his two [Brooklyn] properties and put it up for sale,’ Sliwa stated. ‘That’s how you pay back that debt!’

De Blasio’s earned his six-figure pension after working in NYC public office for two decades. Before he spent eight years as mayor, the politician served as a Brooklyn city councilman and then as public advocate.

Councilman Robert Holden (left), a Democrat, and former Republican mayoral candidate Curtis Sliwa (right) have both called upon the city to take action against de Blasio

De Blasio is accused of using his security detail on his failed presidential campaign trail and for personal errands. He and his wife, Chirlane McCray, are pictured hitting the Park Slope YMCA gym in July 2017

De Blasio has racked up $2.5 million in debt which includes $300,000 in legal bills from being defended in a probe of his fundraising activities.

Another $200,000 is from previous campaign accounts that owe money.

Although he is eligible to collect a six-figure pension and also receives rental income on the two Brooklyn homes he owns, the Post reported last year that financial struggles forced de Blasio to take out a second mortgage on one of the homes which cost him $615,342.

Despite their seemingly tight finances, de Blasio and his wife, author Chirlane McCray, have been living large at a pricey, four-star hotel in Brooklyn since he left office months ago.

He and McCray, 67, were spotted last with their taxpayer-funded NYPD security detail by their side at the lavish New York Marriott at the Brooklyn Bridge, the New York Post reported.

De Blasio and McCray have been living large at a pricey, four-star hotel in Brooklyn since he left office months ago, despite having racked up $2.5 million in debt. They are pictured leaving their Park Slope home in November 2013

The couple left Gracie Mansion after de Blasio left office at the end of December, but have been staying at the hotel while their Park Slope, Brooklyn home undergoes renovations.

The 667-room hotel at Brooklyn Bridge Hotel, with suites that cost anywhere from $600 to $5,000 a night, features an indoor pool, a fitness center with several Peloton machines, two restaurants and waterfront views.

De Blasio and his wife are currently staying in one of the hotel suites with a $600 a night rate that offers a bedroom and living room, the Post reported.

The hotel is owned by Muss Development, a Queens company that has been a longtime supporter of de Blasio, the Post reported.

A spokeswoman for Muss Development told the Post that the hotel’s ownership ‘is not involved with specific guests’ accommodations.’