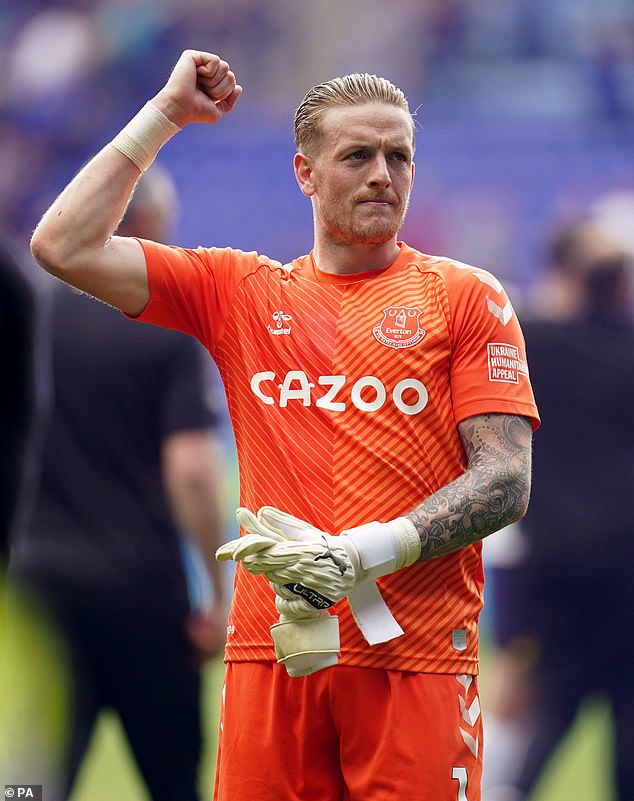 Frank Lampard hailed Jordan Pickford as one of the world’s best after the England goalkeeper’s spectacular saves earned Everton another vital win in their battle for Premier League survival.

Everton won away from home for the first time since August to seal back-to-back wins and climb out of the relegation zone — and they will fancy their chances of making it three victories in a row at relegated Watford on Wednesday.

Ukrainian star Vitalii Mykolenko gave Everton an early lead and though Patson Daka equalised for Leicester, Mason Holgate — who declared himself fit only hours before the game after illness — restored the visitors’ advantage on the half-hour and Pickford’s efforts ensured they held on to it.

‘Jordan gives the team huge confidence,’ said Lampard, who was also indebted to Pickford’s brilliance in the win over Chelsea eight days ago.

‘You need goalkeepers to make big saves for you and I’m pleased he is getting the recognition he deserves.

‘He is not just England’s No 1 but one of the top goalkeepers in the world. For some reason you don’t always get the recognition you deserve as England’s No 1.

‘A week ago we were five points away from safety and now we are a point above the relegation zone. But we are still in a relegation fight. We need to protect against over-confidence.

‘Our away form has been a problem and there has never been a more important time to put it right.

‘We were banging the drum to ensure the players knew we needed to change our form without the Goodison Park crowd behind us — though fortunately we had a version of it here.’

The 3,301 travelling Everton fans were in joyous mood but Leicester were booed off at half time and full time. They are now without a win in five in the league and after losing in the Europa Conference League semi-finals to Roma, their campaign is drifting to a disappointing end.

It was no surprise that the winner came from a corner — it was the 15th time that Leicester have conceded in this fashion in the league this season.

Manager Brendan Rodgers revealed he had an ‘honest conversation’ with his players. ‘I normally don’t say so much to the players after games but today was hugely disappointing and we need honest feedback to go forward,’ he said. ‘The players were honest in the conversation and that is the best way.

‘The biggest disappointment was to concede the goal from the corner. It was just about determination to defend the ball. It’s on me and I need to keep looking at that until the summer, when we can do something about it.’