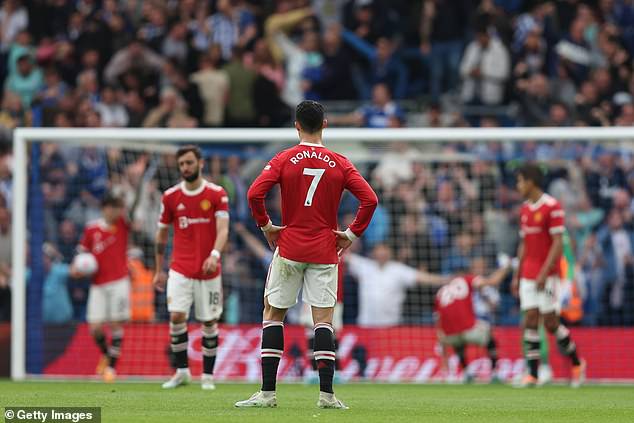 ‘Just end the f***ing season… this is HUMILIATING!’: Manchester United fans display their FURY online after Ralf Rangnick’s side are thrashed 4-0 by Brighton, ending their slim Champions League hopes

Manchester United’s fans slammed their side’s humiliating 4-0 defeat to Brighton, which ended any dim hopes of qualifying for the Champions League next season.

Brighton came out strongly after the interval and struck three goals in before the hour mark thanks to Marc Cucurella, Pascal Gross and Leandro Trossard.

Manchester United were humiliated 4-0 by Brighton, ending their hopes of top-four finish

Brighton were ruthless in front of goal in the second-half, scoring three goals in 11 minutes

United fans were left furious as some begged for the season to come to and end. One said: ‘Just end the f***ing season.This is just humiliating.’

Another wrote: ‘Can you imagine being paid well above the going rate for your profession, only to be so bad at it?

‘I don’t get why they aren’t embarrassed. Why do they have no shame? Honestly, can’t imagine how they live their lives, knowing this is how they do their job most weeks’.

A third United fans blamed the owners for the loss to Brighton. ‘Yes blame the players but this is a direct result of the terrible and disgraceful ownership.

‘The Glazers wrote off the season in November and you are seeing the on-pitch consequences of that. A truly shameful way to run England’s biggest football club. Robbery in plain sight,’ he wrote.

The loss to Graham Potter’s side condemned United to their worst point tally in the Premier League era.

Others on social media also reacted, with former England striker Gary Lineker claiming the loss was United’s ‘worst performance of the season’.

Lineker tweeted: ‘Good heavens! @OfficialBHAFC are playing some fabulous football. By contrast this might be @ManUtd’s worst performance of the season…and that’s quite an achievement.’

Arsenal fan Piers Morgan wrote: ‘Manchester United are an embarrassing bunch of overpaid, work-shy prima donnas. Without Ronaldo they’d be relegated – he should get out of there fast and join Arsenal.

‘At least our players give it 100% every game. These United players don’t give 1% when the chips are down.’