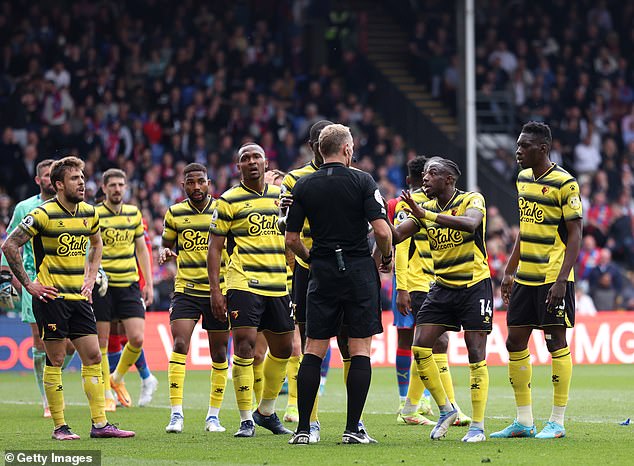 As they trudged out of Selhurst Park, old foe Wilfried Zaha’s match-winning penalty having confirmed Watford’s second Premier League relegation in three seasons, there was a fitting end to the day.

Little defence was offered up by some of Watford’s players, under orders not to speak to anybody other than those they were contractually obliged to in case they said the wrong thing.

Instead it was left to Roy Hodgson to do most of the fronting up as the inquest began.

Hodgson has only been in charge since late January, taking over when the rot had already set in, so being left in a pretty helpless position was nothing new.

He certainly should not have to shoulder the entire responsibility for Watford going down.

That has to be shared with Claudio Ranieri and Xisco Munoz, the two managers before him, Watford’s below-quality squad and trigger-happy owners, the Pozzo family.

For his part, Hodgson insisted: ‘My conscience and Ray’s (assistant Lewington) are 100 per cent clear. We couldn’t do any more than we have done.’

It is a first career relegation for 74-year-old Roy Hodgson, who has been a manager since 1976

That Watford have got through another three managers this season confirms that lessons have not been learned. Replacing their ruthless hire-and-fire policy with a bit of stability might be a good starting point.

Watford had three permanent managers in their previous Premier League campaign plus an interim. That also ended in relegation too.

What do they say about insanity, doing the same thing and expecting different results?

Hodgson said diplomatically: ‘They have been quite successful with their model and taken the club from mid-table in the Championship into the Premier League on two occasions.

‘Now, their job, I’m sure, will be looking at those two periods and working out ‘What do we need to do to make certain next time we go up we don’t immediately plunge back down again?’ They obviously know what works for them and what doesn’t.’

The constant changes and double relegation invite questions about the judgment of Watford’s owners and whether their approach works in the top flight.

In Hodgson’s case they got to him too late. His track record proves he knows a thing or two about avoiding relegation when given a genuine chance.

This was the well-travelled 74-year-old’s first top division relegation and Watford could do worse than tapping into his considerable knowledge before he heads into retirement.

‘I won’t be advising unless my advice is sought,’ he said.

It would be another Watford mistake if it is not.