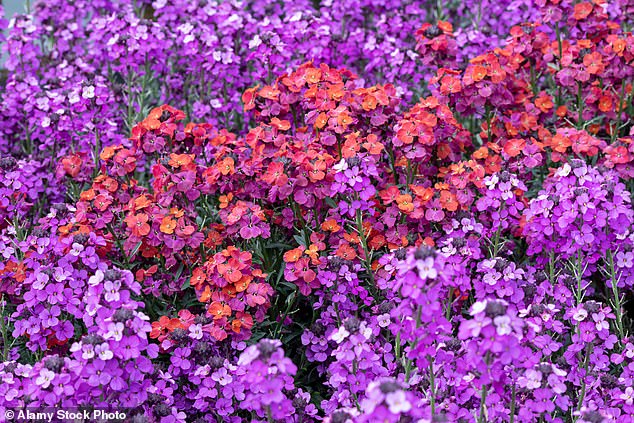 Spring flowers are wonderful, but so many of them are short lived. The poet Robert Herrick wept to see daffodils ‘haste away so soon’.

Tulips come and go in three weeks, but not wallflowers. Those hardy souls bloom fragrantly from March to June — and that after a winter of greenery.

It may seem dotty to recommend them now, when they’re nearly over. But May is the month to sow wallflower seeds.

Nigel Colborn says that May is the month to start sowing wallflower seeds. UK-based garden expert advises starting next weekend for next spring

They’ll develop this summer for bedding out in September. There are also perennial wallflowers, similar to the bedders but flowering for longer. Little Alpine wallflowers exist, too.

Wallflower names can be confusing. Bedding varieties are Cheiranthus. The rest are mostly Erysimum. All have four petalled flowers, most of them sweetly scented.

Bedding wallflowers are the most fragrant. For formal beds, nothing, other than forget-menots, team so sweetly with tulips. The wallflowers also bring fragrance, which most tulips lack.

If you want to grow bedding wallflowers for next spring, then make a start this weekend. Young plants from seeds sown now can be bedded out in the early autumn.

There’s no need to fuss with sowing in trays and pricking out. All you need is a prepared seedbed outside — perhaps near your vegetables. Sow the seeds thinly, into shallow drills, in well prepared ground. Keep an eye on the growing plants and water them if there’s a drought.

By late August, you should have rows of bushy plants. Lift those between then and early October. Space them evenly, in a forked-over bed or in groups in a mixed border. Flowering begins hesitantly in March, building to a May climax.

Bedding types are excellent for cut flowers, too. They last in water and will fill a room with their gentle scent. Gather seed from summer-ripened pods.

Back in my youth, almost everyone bedded out wall­flowers. Today, they’re grown less often. Formal bedding is often sneered at, too, but wallflowers don’t have to be regimented. They’re beautiful even in the most ramshackle planting and pollinators love them.

Then there are the perennial types. At their best, larger ones are bushy and flower-laden. Most grow taller and wider than bedding wallflowers, flowering constantly but less heavily.

The best known is Erysimum Bowles Mauve, a stiff-stemmed sub-shrub with grey-green leaves, dark buds and purply flowers. Cuttings will root in a few weeks.

You’ll get at least 18 months of almost continuous flower from a young Bowles Mauve plant. Then it becomes gaunt, woody and loses vigour.

Other perennial varieties are less shrubby with more flexible stems. Among those, crocus.co. uk offers Spring Breeze Sunset, a beauty with orange flowers that turn plummy mauve as they age. Red Jep is similar but a more coppery bronze.

Then there are little Alpine varieties. They develop as small, scruffy mounds. My favourite, Moonlight, is an old variety with custard-yellow flowers.