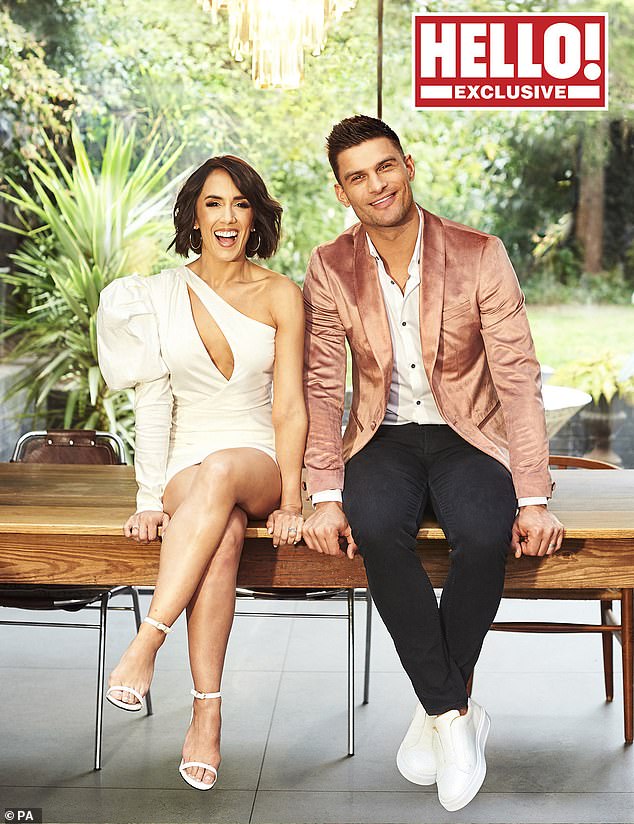 Aljaz Skorjanec has revealed he is retraining to become an actor in order to pursue his Hollywood dreams after he quit Strictly Come Dancing.

The former Strictly professional, 32, is currently taking acting lessons and has started auditioning for roles as he is ‘trying to get his foot in the door’ of Hollywood.

The Slovenian dancer and choreographer announced in March that he was departing after nine years on the BBC flagship show.

Career change|: Aljaz Skorjanec has revealed he is retraining to become an actor in order to pursue his Hollywood dreams after he quit Strictly Come Dancing

He is married to fellow dancer Janette Manrara, 38, and news of his exit came less than a year after she stepped down from the show to become the co-host of spin-off It Takes Two.

In an interview with Hello! Magazine, Aljaz said: ‘Being a couple on Strictly gave us an edge and I feel like it can be exactly the same when it comes to, potentially, one day being on a different kind of TV programme together.

‘I’ve had an incredible nine years on Strictly and have felt so lucky to be there, but it felt like the right time to take a risk and open myself up to new challenges.

‘I want to try other things like film, TV and radio while I’m still young enough and my body is 100% capable.

Big news: The former Strictly professional, 32, is currently taking acting lessons and has started auditioning for roles as he is ‘trying to get his foot in the door’ of Hollywood

He explained that he’s dreaming big and hopes to make it in the industry one day: ‘I’m just a fan of the craft and am trying to get my foot in the door.

‘Do I want to go to Hollywood? Of course! If I didn’t dream big I would never have ended up on Strictly.’

Out now: Read the full interview in Hello magazine, out now

Janette added: ‘I already imagine him as a Hollywood leading man, he definitely has what it takes and he has always been my Prince Charming.’

In his Strictly Come Dancing debut series, Aljaz took home the prize with model and TV presenter Abbey Clancy during the first all-female final on the show.

In 2017, he reached the final with partner Gemma Atkinson but missed out to winners Joe McFadden and Katya Jones.

Speaking about his decision to leave the show, he said: ‘Janette and I were a team and helped choreograph each other’s routines and every time I needed a shoulder or a hug she was there.

‘But last year was different because, for the first time ever, I felt like I was doing Strictly on my own.’

Janette recalled the moment Aljaz shared his news to social media: ‘The day he made the announcement we were literally holding hands with tears in our eyes because it was a bittersweet feeling.

‘We always say it was never a Strictly curse for us, it was always a blessing and the best thing for us – in our marriage, in our careers and everything.’

The couple said they would like to present a TV show together, inspired by husband and wife duo Eamonn Holmes and Ruth Langsford.

Couple: He followed in the footsteps of his wife Janette Manrara, who announced her own departure from the pro lineup last year as she moved into the presenter role for It Takes Two (pictured performing on the show in 2021)

In a statement announcing his departure from Strictly, Aljaž said: ‘On a beautiful sunny day in May 2013 one phone call changed my life forever!

‘It went like this… we would like to offer you a position on @bbcstrictly as a professional dancer. A dream became a reality and it was the biggest opportunity for a 23 year old boy from Slovenia

‘It didn’t matter how many beautiful ballrooms I performed in during my competitive career, stepping onto the sacred Strictly floor was the most nervous I had ever been.’

‘A little while ago I made the tough decision that Strictly 2021 would be my last. The show has given me an opportunity and freedom to create and express myself in front of millions of people every weekend for the last 9 years.

‘The love and support I got from the team of producers was second to none. Jason Gilkison, Sarah James, Kim Winston, Jack Gledhill are just a few of the unsung heroes behind the success of the show – I am forever grateful to them!

Born in Slovenia, Aljaž took to the dance floor at the age of five and enjoyed much success in his home country, where he won 19 Slovenian championships in Ballroom and Latin.

Strictly Come Dancing, a BBC Studios Entertainment Production for the BBC, will return for its twentieth fabulous series on BBC One and BBC iPlayer later in 2022.

Moving on: In a statement released via social media, Aljaž said: ‘On a beautiful sunny day in May 2013 one phone call changed my life forever!’