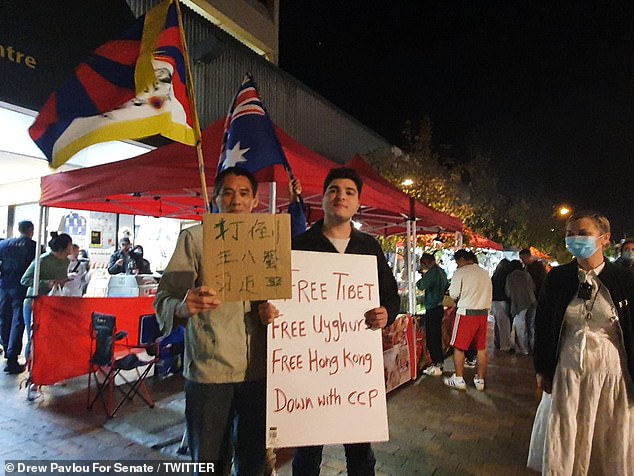 An outspoken Australian critic of the Chinese Communist Party has been arrested for holding up a sign saying ‘f*** Xi Jinping’.

Drew Pavlou, 22, was rounded up by NSW Police at an anti-Communist Party rally in Sydney’s Eastwood on Saturday night and spent five hours in a police cell.

A few dozen pro-democracy campaigners gathered in the north-western suburb with a high number of Chinese residents, one week after Mr Pavlou caused controversy by holding up his sign.

On this occasion the Queenslander was carrying a placard that read: ‘Free Hong Kong, free Tibet, free the Uyghurs, down with CCP’.

Mr Pavlou, who is running as a candidate for the Senate at the Federal election next Saturday, said he told the arresting officer captured on video patting him down against a police van, to ‘buy me dinner first’.

‘I was just standing there holding a sign. There were no profanities this time and I wasn’t even the most vocal protester,’ Mr Pavlou told Daily Mail Australia.

‘But when a group of Chinese government supporters came along and started swearing in Mandarin at us, police gave me a charge sheet for the sign that said f**k Xi Jinping.’

The officers momentarily detained him before allowing him to leave. He then returned to the protest and was given a formal move-on order and told by officers he would be arrested if he did not leave the area.

Police were concerned that the ‘unauthorised assembly was causing fear and alarm among the community’.

‘I said, with respect, sir, I would rather be arrested because I believe this is my right as an Australian to speak freely,’ he said.

Video posted online shows officers patting down the Senate candidate before being loaded into a police van and taken back to the station.

The Queenslander was carrying a placard that read: ‘Free Hong Kong, free Tibet, free the Uyghurs, down with CCP’. Senate candidate arrested protesting against Xi Jinping

‘When he was patting me down I said “buy me dinner first mate” because it was quite invasive to be honest,’ Mr Pavlou said.

He is now facing one charge of offensive language and another of failing to follow a police direction.

Mr Pavlou intends to fight the charges when he appears in Hornsby Local Court May 25th, with his esteemed barrister Mr Tony Morris QC vowing to take the case all the way to the High Court if necessary.

‘People should be far more concerned about the one million Chinese Muslims in concentration camps and Xi Jinping’s signature policy of genocide,’ he said.

‘In the grand scheme of things, Drew puts f*** Xi Jinping on a sign does not compare.’

He revealed that during the demonstration various Chinese Australians thanked him for standing up against China’s ‘dictator’.

‘I had people coming up to me saying thank you. They said they wanted to protest too but were scared other Chinese people in the community would smash their business or take retribution,’ Mr Pavlou said.

Another man has also been charged over the viral protest in Eastwood last week, with a 48-year-old man facing one count of assault.

There were ugly scenes when an angry mob surrounded Mr Pavlou as he held up his x-rated sign.

A political activist caused a huge stir at a Sydney shopping centre on Saturday after carrying a sign which read ‘F*** Xi Jinping’ (pictured, stunned locals in Eastwood vent their anger towards Drew Pavlou)

Drew Pavlou later defended his conduct on Facebook, stating ‘Australia is a democracy and we should be free to insult any leader no matter how coarsely’

Another person punched Mr Pavlou’s sign and told him: ‘America has genocide, not Xi Jinping.’

Video shows how the situation quickly escalated when two men attempted to take the camera from Mr Pavlou’s friend and snatched his sign away.

Several women in the crowd told Mr Pavlou he was a coward and to ‘f*** off’ while he remained standing in the street.

If successful in his campaign at this month’s federal election, Mr Pavlou would be the youngest senator in Australian history.