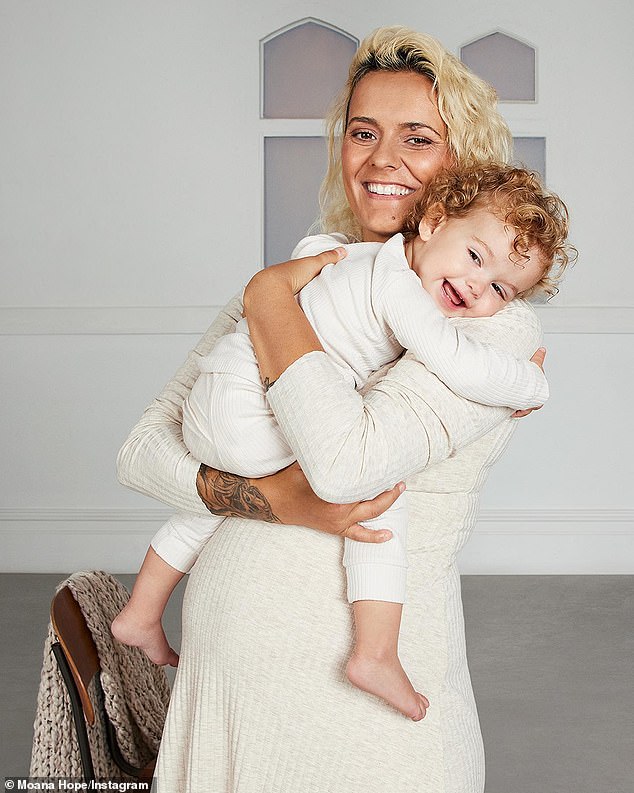 Former AFLW star Moana Hope has opened up about the challenges of parenthood, her pregnancy and her favourite things about being a mum to a toddler.

The 34-year-old, from Melbourne, is raising 17-month-old Svea with her wife Isabella Carlstrom and is in her third trimester with baby number two due late next month.

Moana told 9honey her biggest parenting ‘fail’ was being too much of a ‘safety mum’ and had to stop ‘overthinking’ her parenting style to follow her ‘mother’s intuition’.

AFLW star Moana Hope (pictured), who is pregnant with baby number two, has opened up about her biggest parenting ‘fail’ and shared the best advice she ever received as a mum

‘I’ve had to really let go of my ‘safety mum’ because Svea is probably going to be a red bull athlete one day because she climbs everything,’ the soon to be mum-of-two said.

‘It’s not really a fail but it’s definitely something I’ve had to adapt to make sure I’m not stopping Svea from becoming whoever she wants to be.’

Moana and Isabella, who tied the knot in 2019, went through IVF to conceive both Svea and baby number two using the same donor.

Isabella gave birth to Svea in November 2020 and now Moana is carrying their second child.

During her first pregnancy, Moana said she received some sound advice from a follower on Instagram that changed her outlook on parenting.

‘I was reading every book, listening to every podcast, taking everyone’s advice but the best advice I ever got was from a lady on Instagram and she said ‘just let your mother’s intuition take over,’ she explained.

‘We put down the books and turned off the podcasts and just became parents and it was the best change we made.’

Moana said her favourite thing about pregnancy was feeling all the ‘kicks’ and ‘movements’ from the baby and said while having two babies under two may be a daunting task, she’ll be enlisting all the help she can get from her wife and sister Lavinia.

The retired footy player is the sole carer of 29-year-old Lavinia, or ‘Vinny’ for short, who has a rare neurological condition called Moebius syndrome.

Moana said while having two babies under two may be a daunting task, she’ll be enlisting all the help she can get from her wife and sister Vinny (pictured right) who is under her care

When asked about raising a toddler, the football favourite joked the ‘scariest’ thing to hear is silence.

‘The scariest thing about toddlers is when they’re playing and then you can’t hear a thing because then you’re like: what’s happened? They can make all the noise in the world but the moment you hear nothing is the moment you start running,’ she laughed.

Moana said the hardest thing about having a newborn was adapting to a new and deprived sleep pattern and described parenthood as a ‘rollercoaster’.

At the start you just don’t sleep for six months and then after six months everything just goes super fast.’

Moana said she learned a lot of ‘resilience’ from her own mother and described her favourite thing about being a mum.

‘The best thing about being a mum is just being able to wake up to a little one smiling at you every single day and I think that just gives me a feeling I’ve never experienced and one I’ll always cherish,’ she said.