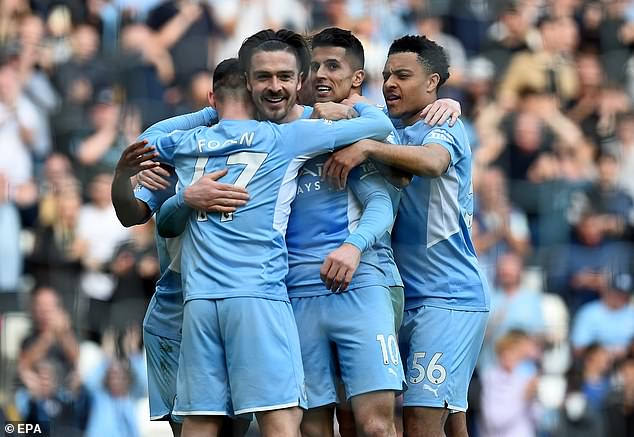 Pep Guardiola is not a man for predictions, so it was unusual to hear him confidently say that this title race would not come down to goal difference a little over a week ago.

Manchester City were trailing by a few at that point — but not any more. Nine unanswered goals later, they now stand four clear of Liverpool.

After the third they poured forward in search of more. A bit like they did before that five-minute catastrophe at the Bernabeu last week actually, although Guardiola might not want reminding.

‘The main thing was to get the win,’ added Jack Grealish. ‘We’re in the driving seat.’

Grealish offered a perfect response to midweek. Lampooned for missed opportunities in Madrid, it was his defensive work that truly contributed to the late defeat.

But against Newcastle, he appeared a man with points to prove, knowing when to slow the game down and how to up the ante off the left.

He played a key role in the extra two-goal buffer manufactured just before full time, leaving with an assist for Sterling’s second and opening the game up in the build-up to Foden’s.