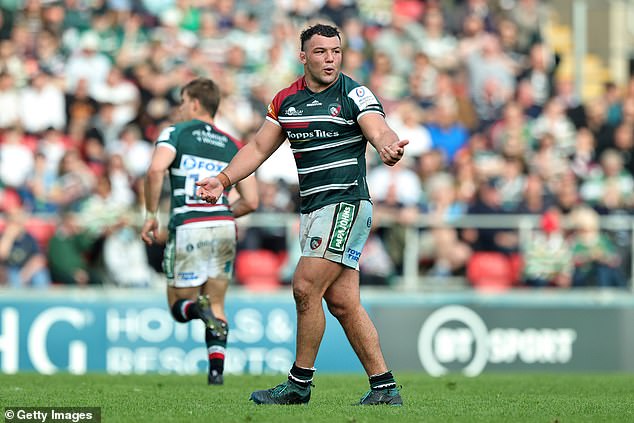 Leicester skipper Ellis Genge has turned his attentions towards a Premiership crown after the club’s European crusade ended in defeat by Leinster.

The prop cut a frustrated figure on Saturday night after the Tigers blew their chance of progression by slipping to a 20-0 deficit in the first half.

‘We have a Premiership title to chase now,’ said Genge. ‘There’s silverware. We are always going to want to win it.

‘It is not going to take a loss or a win to make you want to chase it.’

Leinster will host French champions Toulouse in the semi-finals in Dublin on Saturday.

It will be a fixture of international proportions, with the clubs boasting 22 players who featured in this year’s Six Nations clash between Ireland and France.

‘Both sides will have a lot of familiar faces,’ said Leinster hooker Dan Sheehan. ‘I think the start and physical side will decide the game.

‘Looking at their history and our history, it’s pretty similar. Two massive European clubs going head to head, which is exactly what you want. You have to beat the best to win.

‘It’s a hugely exciting game, especially in the Aviva. I spent 15 years just sitting on the couch watching it or being at the games.

‘To be over the whitewash playing in a game like this is hugely exciting.

‘It’s something that even now, I am getting tingles thinking about it. It’s one of the biggest games I will be involved in, hopefully.’