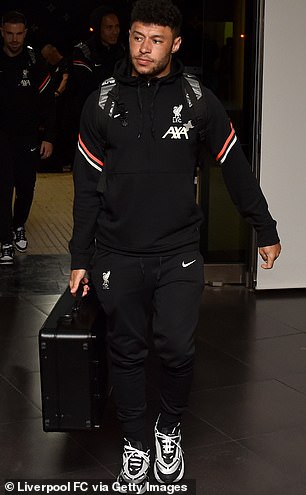 By Joe Bernstein for MailOnline

Alex Oxlade-Chamberlain fears for his Liverpool future after going two months without playing and not hearing from the club about a new contract.

Oxlade-Chamberlain, 28, hasn’t been picked by Jurgen Klopp since an FA Cup tie at Nottingham Forest on March 20 despite being fit and available.

With only a year remaining on his current Anfield deal, the England midfielder is yet to be approached about a renewal and appears to be slipping down the pecking order with Naby Keita and Curtis Jones preferred in recent weeks.

A deal to sign Fulham teenager Fabio Carvalho has also been wrapped up and will be announced soon.

Oxlade-Chamberlain, who has a son with partner and Little Mix singer Perrie Edwards, joined Liverpool from Arsenal in 2017 for a £35million fee and has scored 17 goals in 133 games for the club.

He didn’t feature in Liverpool’s match day squad against Tottenham, adding to his woes, but if Liverpool allow him to leave this summer there is likely to be interest from clubs in the Premier League and Europe.

Oxlade-Chamberlain won the last of his 35 England caps against Kosovo in 2019 but Liverpool insist there are no active plans to sell him.

He is still contracted to be at Anfield next season so remains in their plans as the club adopt a ‘wait and see’ approach.

Liverpool are three points behind Manchester City with the Premier League looking the hardest of the four trophies they are going for. Klopp’s men are next at Aston Villa on Tuesday.

Oxlade-Chamberlain (middle row, left) has not played since March 20 despite being available