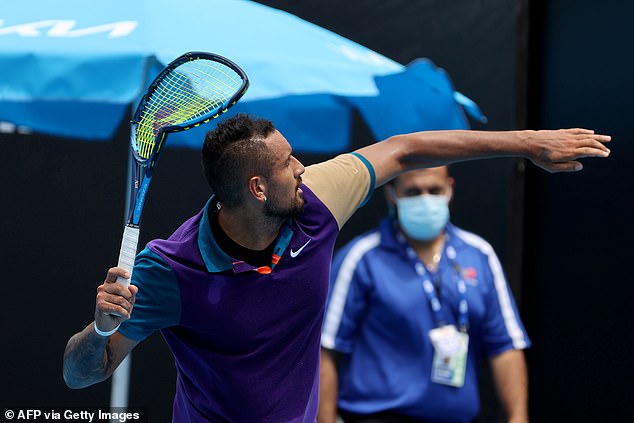 The feud between Nick Kyrgios and Lleyton Hewitt has been reignited with Swedish tennis great Mats Wilander saying Hewitt has reported incidents of children emulating the Aussie tennis bad boy.

Speaking on Eurosport, former world No.1 Wilander lashed Kyrgios for his behaviour and how it is influencing children.

Wilander said he had recently spoken to Hewitt and the Australian Davis Cup captain had expressed concerns about kids copying Kyrgios.

‘It’s just a game where you learn a lot about life and educate and rules and these guys are taking it to a complete different level,’ Wilander said.

‘And I do know from Lleyton Hewitt telling me that every kid in Australia basically, is doing what Nick Kyrgios does.

‘I’m not saying they’re throwing rackets and whatever, but they hit the ball like Nick Kyrgios and that’s kind of bad enough in a way because Nick is so talented, but he doesn’t use his feet at all in any of his shots.

‘He just slaps it with his arm. And they look up to these guys. So I think it’s atrocious.

‘I actually think it’s horrible. I think breaking a racket on a tennis court is the lowest for me because most kids, they cannot afford to buy tennis rackets. I think it’s wrong. I think it’s completely wrong.

The polarising tennis star has courted controversy several times in 2022 already, smashing rackets – with one narrowly missing a ball boy – and clapping back at hecklers at the BNP Paribas Open in Indian Wells, including roping in Hollywood actor Ben Stiller.

Kiwi doubles player Michael Venus called him ‘immature’ and a ‘knob’ during an Australian Open campaign where Kyrgios abused an umpire, flipped his middle finger at spectators, pegged a tennis ball and smashed rackets.

He was fined $35,000 for four offences at the Miami Open as well, including a running battle with Carlos Bernardes who Kyrgios said ‘should be fired on the spot’.

Kyrgios is yet to respond to Wilander’s claims, but recently told Channel Nine that he was battling to keep his emotions in check during tennis matches.

‘It’s something I struggle to deal with, the balance. I’ve always been like that since I was a kid. Matches were always a rollercoaster. I don’t know, I’m never going to be someone who goes out there and ticks all the boxes,’ he said.

‘I really try hard. It’s a struggle for me sometimes; some days to wake up and come to the courts or wake up and just not want to leave my room.

‘I deal with normal human issues but I’m also just proud of myself that I go out there and keep my head down and I play well. It’s not easy to do week in and week out.’

Hewitt was once Kyrgios’ mentor but a bitter feud divided them ahead of the 2019 Australian Open.

Kyrgios and Hewitt reportedly cleared the air at Indian Wells in 2020 but tensions simmered once more when Kyrgios was controversially omitted from the Davis Cup team by team captain Hewitt.

Doubles partner Thanasi Kokkinakis later claimed that Kyrgios was offered a spot in the team, but declined.

‘He’s obviously in our strongest team. He was definitely asked, and I think he and Lleyton have a good relationship, but he just wasn’t available for this time,’ he said.