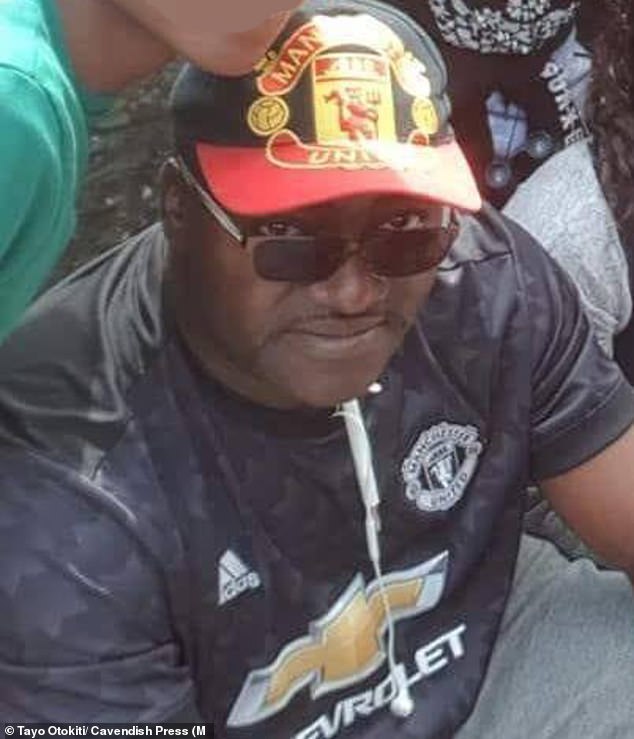 A Manchester United security guard who was sacked after watching TV in a director’s box and sleeping in the control room of Old Trafford stadium has had his lawsuit for racial discrimination thrown out.

Father-of-three Tayo Otokiti slept on duty just days after a cleaner found him relaxing inside the executive box in an area known as the ‘Tower of Power’.

Nigerian-born Mr Otokiti, in his 40s, was transferred to the stadium after a previous disciplinary for watching TV in a coach’s office at the club’s training ground at Carrington.

The fervent United fan was dismissed for gross misconduct and neglect of duty but he later took legal action against his bosses at Controlls Solution Group, which provides security services for the football club.

He claimed racial discrimination and unfair dismissal but a tribunal in Manchester rejected his claims after it emerged a white member of staff had also been fired for sleeping on duty.

Mr Otokiti, in his 40s, had moved to work at the stadium after a previous furore over him watching TV in a coach’s office at the club’s training ground at Carrington

Mr Otokiti, a former finance manager, had initially been taken on in 2012 as one of 800 casual staff employed to provide security for the club, its players and staff.

In April 2017, he was given a permanent job at the Carrington site and the following year was promoted to night-time security supervisor.

His troubles began in May 2019 when he was invited to meet a senior colleague to discuss an allegation he had neglected his duty by watching TV in a United coach’s office.

During the meeting, Mr Otokiti was also informed that his ‘approach’ to the staff member who reported him could bring the company into disrepute and later he was moved to Old Trafford at the request of the club.

No details of the bust-up were given but the guard was given his first and final formal warning for serious misconduct.

At Old Trafford, Mr Otokiti was given the job of patrolling the stadium’s stands including The East Stand  – known as the ‘Tower of Power’ as it comprises the directors’ offices and the executive boxes.

But on the night of May 31, 2019, the tribunal was told he sneaked off his shift, went into one of the executive boxes in the East stand, and began watching television.

The claimant was spotted on CCTV by another security officer who dispatched a cleaner to the East Stand where she found Mr Otokiti in the executive box and asked him to leave.

He was subsequently monitored over various shifts before he was summoned to another meeting where he was also confronted about falling asleep in the control room while on duty.

When asked about his presence in the executive box, Mr Otokiti admitted he ‘should have known better’ and apologised but was suspended following the meeting.

At a subsequent disciplinary hearing, he claimed he had been subject to a ‘witch hunt and race discrimination’ and said he had seen a colleague watching TV in the North stand hospitality box.

Mr Otokiti said he had only fallen asleep in the control room as a result of having sleep apnoea.

He denied knowing the East stand was a restricted area but was fired after colleagues noted similarities with the incident at Carrington.

At the tribunal, Mr Otokiti maintained he had been on a break and was entitled to sit down and claimed workmates committed similar misconduct but were not monitored on CCTV.

He said colleagues had ‘colluded’ over their evidence due to his ethnicity and insisted his use of the box was not serious as it occurred off-season in the early hours of the morning.

But employment judge Jennifer Ainscough said: ‘Any reasonable person would know that the East stand, was a restricted area in light of the fact that it was known as the “Tower of Power” because it contained the Directors’ offices and the Executive boxes.

The fervent United fan was dismissed for gross misconduct and neglect of duty but later tried to sue his bosses at Controlls Solution Group, which provides security services to the club

‘At the very least, the claimant knew it was not a place to watch television while on duty. The claimant had a mistaken view that, out of season, the importance of the East stand was downgraded in seeking to justify his conduct.

‘A mistaken view, however, is no defence when a previous warning set out clearly that watching television in any restricted area was forbidden.

‘The claimant would have known from the wording of the warning he received at Carrington, that watching television in a restricted area was grounds for dismissal.’

Lawyers for Mr Otokiti’s former employers earlier submitted that dismissal was ‘within the range of reasonable responses’ and said he had been treated ‘more favourably’ following the incident at Carrington.

They said monitoring of Mr Otokiti by CCTV was ‘justified’ whilst senior bosses said his behaviour was ‘jeopardising’ their contract with Manchester United.