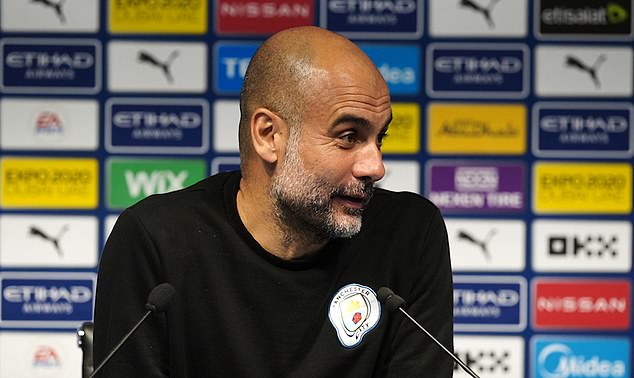 A grinning Pep Guardiola issued a joking apology to a Manchester United-supporting journalist for how difficult following City’s arch rivals must be – and doubled down on his claim that ‘everyone’ in the country is rooting for Liverpool.

City moved three points clear at the top of the Premier League after thrashing Newcastle 5-0 at the Etihad Stadium, a statement performance which also saw them add to their advantage in the goal difference column. Guardiola, however, wasn’t satisfied.

Indeed, during his round of post-match interviews, he complained about how the whole nation has thrown their weight behind Jurgen Klopp’s high-flyers instead.

United are officially out of the Champions League race after a miserable, humiliating season

And while speaking to journalists in his press conference, he even light-heartedly suggested one of them supported Liverpool, before he was corrected.

Guardiola was asked if he was ‘ecstatic’ with his side’s performance and, with a smile on his face, replied: ‘Did you have doubts? Yes, you are a Liverpool fan. Come on.’

He was then told that the reporter was instead a follower of both City and Liverpool’s arch rivals, United, an admission that caused several laughs inside the room.

But despite the emphatic win, Guardiola complained ‘everyone’ is rooting for Liverpool instead

As quick as a flash, Guardiola then simply said: ‘I’m sorry, James.’

United have endured a nightmare campaign this year, having officially been ruled out of the Champions League race and been dogged by dressing room unrest.

They have already announced the imminent arrival of Erik ten Hag as their new permanent manager, and it is likely they will look to clear the decks this summer.

City, meanwhile, will hope to avoid a rare season without trophies as they challenge for the top-flight title. They were able to capitalise on Liverpool’s draw with Tottenham by hammering Newcastle.

The defending champions will clinch a fourth title in five years if they win their remaining three matches, starting at Wolves on Wednesday evening.

And boss Guardiola believes that scenario would upset the public.

‘Everyone in this country supports Liverpool, the media and everyone, of course, because Liverpool has an incredible history in European competition,’ he said.

‘The people want Liverpool to win more than us. It’s not an issue. It’s normal.

‘But the question is today.

‘Before the start of the game, the people were cheering and supporting us – they know that even being out of the Champions League, we can rely on those players.

Their next league clash against Wolves has been labelled as the ‘real, real’ final by Guardiola

‘We need nine points or maybe six right now, it depends what happens in the next two games in terms of goal difference.

‘But now, Wednesday at Wolves is the real, real final for us. We’re going to try to win there. Our destiny is in our hands.’

In a major blow, however, Guardiola confirmed that key defenders Ruben Dias, John Stones and Kyle Walker will play no further part in the title run-in.