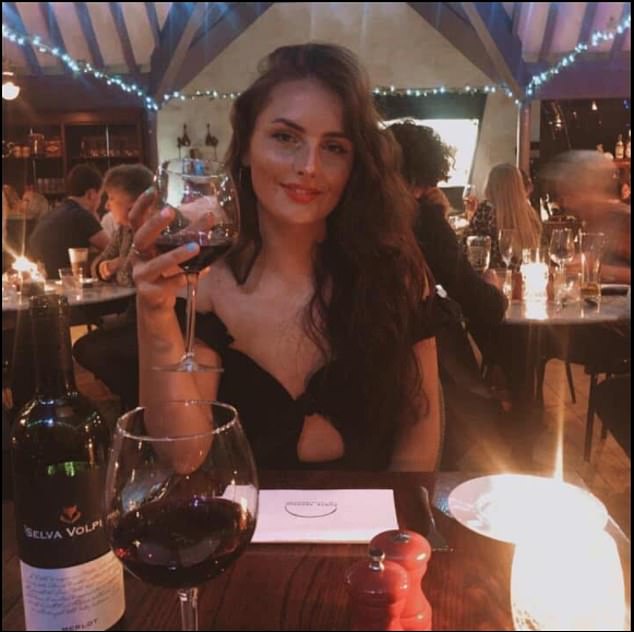 A young restaurant manager has told how she was reduced to tears after three hours of hell serving a table wealthy customers who ‘disrespected’ her because she was a low-wage earner.

Lily O’Connor, 22, ended up in tears after being bullied by the men from a top legal firm.

One of the diners advised her to work seven nights a week if she wanted to make a ‘living’ salary.

Front of house manager Lily, 22, was mocked and told to work every night to make a ‘living’

O’Connor said the posh law firm workers were ‘trying to degrade’ her for doing a job she loves. But Lily, who has been handed the entire £1,000 they spent after being subject to the abuse, is the real winner

Front of house manager Lily said: ‘He used humiliating tactics, trying to degrade me for the job I love doing.

Lee Skeet’s Cardiff restaurant Cora: Guests are treated to a six-course menu that heavily features seafood for £75 per person

Situated at 83 Pontcanna Street, on the first floor above Cafe Milkwood, Cora is the first restaurant from Lee Skeet.

It serves just twelve guests in its intimate dining room, supplying a set six course tasting menu for £75 per person or a lunch menu for £50 per person.

The menu is heavily rooted in seafood, but also includes meats and wild game throughout the seasons.

‘The aim is to create a relaxed and ambitious restaurant where you can enjoy the best quality produce available in the capital, in a laid back and inviting atmosphere, all set to a hip hop soundtrack,’ reads a description on the eatery’s website.

Situated at 83 Pontcanna Street, on the first floor above Cafe Milkwood, Cora is the first restaurant from Lee Skeet. Pictured, one of his dishes

It serves just twelve guests in its intimate dining room, supplying a set six course tasting menu for £75 per person or a lunch menu for £50 per person. Pictured, another of Lee’s dishes

‘He was saying: ‘How do you make a living?’ at this and ‘Why don’t you work seven nights a week?’

‘It was upsetting – I had put up with that demeaning attitude while I served them seven courses.

‘I was even told to ‘stick my schnoz in that’ after they complained about one of the wines I served them over the seven-course tasting menu.’

Chef and restaurant boss Lee Skeet was furious when he discovered Lily had been ‘touched unwantedly and talked down to’ at his Cora restaurant in Pontcanna, Cardiff.

He contacted the company who made the booking and told them he would repay their £1,000 bill but take off a £100 tip for Lily.

But the firm didn’t respond and Lee, 25, has now given Lily the full amount to compensate for her three hours of abuse.

Lee and Lily blame just one of the six men at the table for picking on her because she was a young woman working hard in a struggling industry.

Lily, who has five years’ experience in the hospitality industry, said: ‘We don’t want to call out the individual, it’s not about naming and shaming anyone. But there is a point to be made about hospitality workers and the way they are treated.

‘I hope I dealt with it professionally at the time but at the end of service Lee could tell I’d had enough of being treated so badly.’

The six businessmen downed seven bottles of wine during the sitting and ran up a £1,000 bill, the largest since the restaurant opened in January.

Lee, who has worked for celebrity chefs Gordon Ramsey, Marcus Wareing and Tom Aikens has banned the company from returning to Cora which is always fully booked because it has just 12 covers.

Father-of-two Lee said: ‘The booking was made by a secretary from the company – it was a work dinner.

‘The company boss was present, he was the lead guy but not the troublemaker. It was someone else at the table.

‘It is not going to happen again – people should know that behaviour like that will not be tolerated in this restaurant.

‘We have a tight-knit customer base and I want people to know that if anyone behaves like that they are not welcome here.’

Lee was busy in the kitchen at the time but said he noticed a change in Lily’s demeanor while serving the table.

He said: ‘I could see she was a bit aggrieved and she told me they were not the nicest of people.

‘It’s my responsibility to look after her – it made me feel like a bad employer and a terrible dad, having my own daughter.’

Lee described Lily as a ‘brilliant’ front of house manager adding: ‘Before I had my own place I worked in Michelin starred restaurants.

‘She’s by far the best I’ve worked with – that’s why she’s been given that role.’

Lee was inundated with praise on social media after tweeting that ‘we should start calling out rich people who think they can treat people like c**p’.

He has made a new rule that staff should make him aware of bad behaviour while customers are still in the restaurant.

Lee said: ‘If it happens again, Lily can come straight to me and I will deal with it at the time it happens.’

The story went viral on social media earlier this week when Lee took to Twitter.

He wrote online: ‘Dear… I wanted to firstly thank you for choosing my restaurant for your meal tonight, and I understand you had the biggest bill we’ve ever had on one table here.

‘Unfortunately throughout the evening I was made aware that your party’s behaviour was inappropriate towards Lily, who runs front of house.

‘She has told me that – as a 22-year-old girl – she was talked down to, disrespected and touched unwantedly by members of your group.

‘I have spent the last hour having conversations with her that break my heart, make me feel like a s*** employer, and a terrible dad, having my own daughter.

‘I would thank you to never come back to my restaurant. Lily means a lot more to me than money,’ he added in his first letter (above)

Taking to his social media account (above), the chef said he had reacted ‘too quickly and emotionally last night’ – and instead has kept the money the ‘inappropriate’ diners paid and transferred it to his staff member

‘Please provide your bank details and I will refund your entire bill of £1,000 minus £100 that I believe you should have tipped Lily – which I will pay directly to her – as you left no tip.

‘I would thank you to never come back to my restaurant. Lily means a lot more to me than money. I also think you should assess the people you surround yourself with.’

Lee posted the note to Twitter alongside the caption: ‘I’m not clout chasing or looking for likes. I just think we should start calling out rich people who think they can treat people like c***.

Following feedback from his followers, who suggested Lily should receive the £1,000, Lee took to Twitter today to explain that he had transferred the money to his staff member.

Posting a screenshot of the transaction, he wrote: ‘On reflection I reacted too quickly and emotionally last night. Sorry I was a little bit angry and protective. I’m not going to refund the customer’s money. I’ve instead kept it and transferred to Lily x’