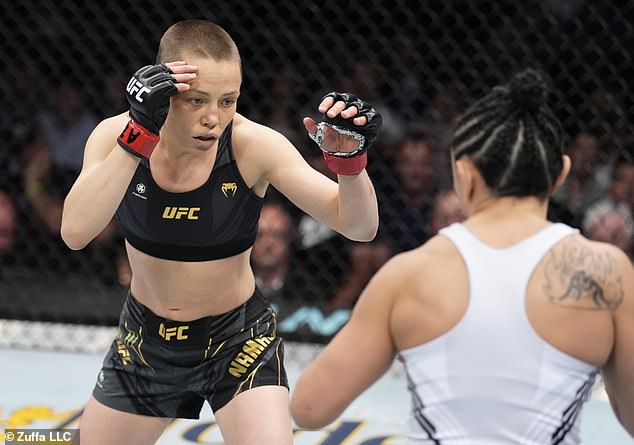 ‘Sorry to everyone, I f***ed up’: Rose Namajunas apologises for bizarre performance in ‘snoozefest’ title defeat by Carla Esparza at UFC 274 following fan backlash

Rose Namajunas has apologised for her performance, or lack thereof, in the bizarre loss of her title at UFC 274.

The former strawweight champion was incredibly inactive over 25 minutes against Carla Esparza in one of the most forgettable five-rounders in history.

There were boos throughout as both women refused to engage and Esparza was deemed to have done just enough to win on the scorecards.

In the immediate aftermath, Namajunas was defensive of her performance despite backlash from fans and Dana White, who admitted he ‘zoned out halfway through’.

Esparza reflected: ‘I don’t feel that Rose pushed the pace. ‘As a champion, you really need to go after it, and [say], ‘This is my octagon.’

‘I don’t really feel that she was aggressive enough to say, ‘Hey, this was my win,’ so at the end of the day, I got the belt, and if she wants a rematch, I’m down for that, too.’

She added: ‘I hate to say it this way, but, it’s hard to fight someone that doesn’t want to fight.’

Now the dust has settled, it seems Namajunas is coming to terms with her performance.

She wrote on social media: ‘Sorry to everyone, I f****d up. Definitely feel like a s**** human being but this will make me better, hats off to Carla and thanks everyone who’s been there for me.’

A number of MMA fans complained about the lack of entertainment value in the co-main event on Saturday.

One wrote: ‘So thoughtful of Rose Namajunas and Carla Esparza to practice social distancing during this fight.

Another joked: ‘I’ve gotta hand it to Rose Namajunas and Carla Esparza. After 22 years of being paralysed, I finally summoned the strength to stand up and turn my TV off. Truly life changing moment.’

‘I’m so glad that Rose Namajunas lost her belt. If she’d of gotten the decision there would of been repercussions. She legit stalled the entire fight.’

Namajunas’ display was out of character and she has delivered some incredible moments in the octagon during her career.

Her TKO win over Joanna Jedrzejczyk and head kick knockout of Zhang Weili will both live long in the memory and no doubt she will endevour to be more active in her next fight.