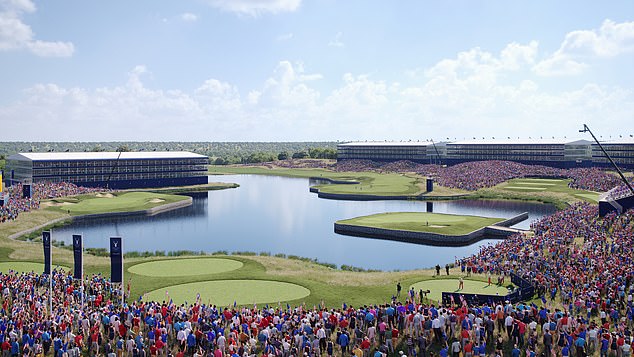 The developers behind plans to bring the Ryder Cup to Bolton are to appeal, after local politicians rejected their £250m proposal.

In October Sportsmail reported that an ambitious plan had been hatched to bring one of the world’s major sporting events to the Lancashire town in 2031.

The venue subsequently made it down to the final two English bids, with only the London Club standing in its way and officials keen to bring the tournament to these shores.

However, the plan – which included homes, a golfing academy, allotments and a village hall – were rejected by councillors due to fears over its impact on greenbelt land.

Now, Peel L&P says it will appeal the decision and add that they remain committed to the project.

The developers point out that Bolton council approved original plans in 2018 before rejecting what they have described as ‘a much-improved proposal’ in February ‘before the local elections’.

A vision to bring the Ryder Cup to Bolton, part of a £250million proposal, was rejected by local councillors because of fears over greenbelt land. But the developers plan to appeal

Peel L&P claim the proposals, which could see the US take on Europe in rural Bolton, are worth £1.6bn to the local economy and create 1,000 new jobs over 20 years at Hulton Park, which would be opened to the public for the first time in its history.

The project is conditional on Bolton winning the rights to host the competition, one of the biggest in golf, in either 2031 or 2035. It is one of only two English venues shortlisted by UK Sport and Ryder Cup Europe for 2031.

Peel L&P say revised plans have taken on board further feedback from the community and include better transport proposals.

Richard Knight, director of planning and strategy at Peel L&P said: ‘We already have planning permission to redevelop and restore Hulton Park following the Secretary of State’s approval in 2020 so we were very disappointed that Bolton Council refused our revised and improved scheme as it takes on board more local feedback and really is a once in a generation opportunity to invest in Bolton and level up the region.

‘This level of investment will only happen if Hulton Park secures the Ryder Cup and we remain committed to securing support for the development as we know the extent of the benefits it will bring to Bolton and the North West.’

An appeal to the Planning Inspectorate is likely in the coming weeks, with a public inquiry set to follow.