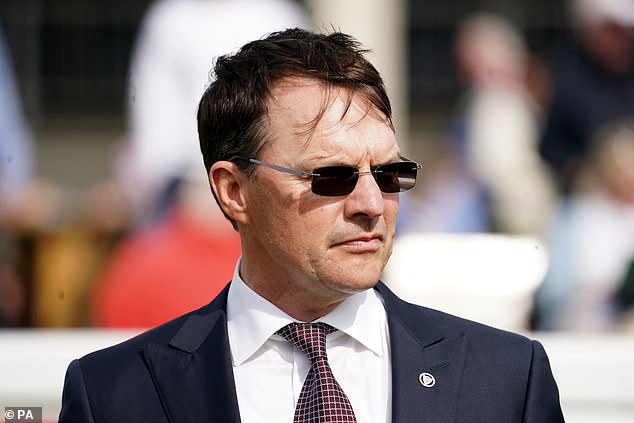 Eight-time Derby winning trainer Aidan O’Brien could have SIX runners in the Epsom Classic next month, as he admits stable jockey Ryan Moore will find it tough not to choose impressive trial victor Stone Age

Aidan O’Brien could have up to six runners in next month’s Cazoo Derby at Epsom and believes stable jockey Ryan Moore will find it hard not to pick Sunday’s Leopardstown impressive trial winner Stone Age as his mount in the Classic.

The scratching of O’Brien’s injured ante-post favourite Luxembourg has presented Moore with a tougher decision than he would have expected especially as O’Brien won Classic trials run at Chester and Lingfield last week with Changingoftheguard, Star of India and United Nations.

O’Brien said: ‘I would think Ryan will find it hard not to ride Stone Age.

‘Leopardstown was a different test but it was hard not to be impressed by Stone Age. Ryan let him roll along and a good thing about him is that he has a lot of experience as a two-year-old. He learnt a lot in those races.’

The colt that could still earn his place in the O’Brien Derby squad is Ballysax Stakes fourth Bluegrass, who runs in Thursday’s Dante Stakes at York.

O’Brien also warned against writing off Point Lonsdale, who finished second to Native Trail in last year’s Group One National Stakes and was 10th in the 2,000 Guineas on his comeback run.

O’Brien, who has won a record eight Derbys including six of the last 10 runnings, said: ‘We thought he would run better than he did in the 2,000 Guineas but we think he will leave that run behind. He is a naturally fit, balanced horse who is very much in the mix.’

O’Brien runs The Algarve in Wednesday’s Musidora Stakes at York when she will put her Cazoo Oaks credentials on the line.

Her stablemate Tuesday, the 7-2 Oaks joint-favourite after her third place in the 1,000 Guineas, will follow the same path as her sister Minding by running in the Irish 1,000 Guineas at the Curragh on May 22 before going to Epsom 12 days later.

Tenebrism, the 2021 Cheveley Park Stakes winner who was unplaced favourite in the 1,000 Guineas, is likely to be dropped back to 6 furlongs for the Commonwealth Cup at Royal Ascot.