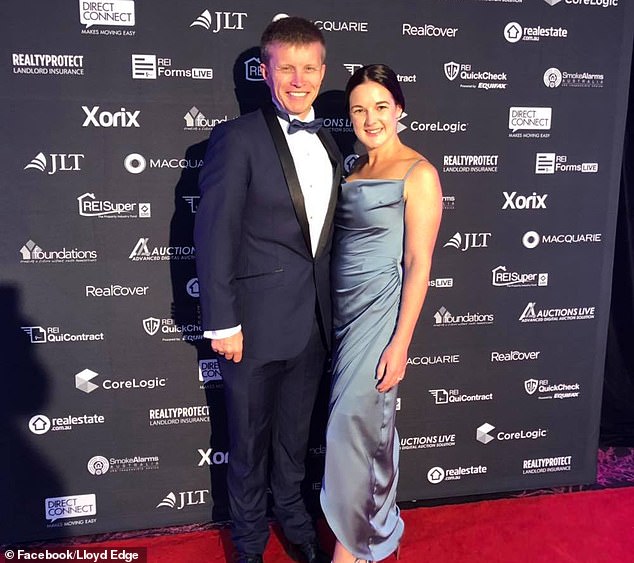 First-home buyers are being urged to snap up a property during the coming year as interest rate rises cause house prices to fall.

Lloyd Edge, the founder and managing director of buyer’s agent Aus Property Professionals, said getting into property when others were scared of mortgage stress was the right time to ‘get a bargain’.

‘That’s when people will be walking away from the market,’ he told Daily Mail Australia.

‘The increase in interest rates will lead to a decline in property prices, and we’re already starting to see the market cool-off.’

Despite the prospect of negative equity, where a new borrower owes more than their home is worth, Mr Edge said a falling market was a better time to get into property with buyers no longer suffering from the fear of missing out.

Lloyd Edge (pictured with wife Renee), the founder and managing director of buyer’s agent Aus Property Professionals, said getting into property when others were scared of mortgage stress was the right time for first-home buyers to make a move

Sydney, Melbourne in worst drop since 2020

‘The prices are actually coming off because before there was so much FOMO, prices continued to increase,’ he said.

‘Even with the interest rate rises, there’s less competition from people, people are taking their time.

‘Potential buyers will be more likely to find their first home for a bargain price, making their mortgage repayments more affordable even if they’re paying a higher interest rate.’

In a sign of a cooling market, Sydney’s weekend auction clearance rate has plunged to just 58.7 per cent as of May 8, down from 81.4 per cent a year ago, new CoreLogic data revealed.

But Adelaide has bucked the trend, with auction clearance rates rising to 81.2 per cent from 77.2 per cent.

The Reserve Bank of Australia last week raised the cash rate by 0.25 percentage points to 0.35 per cent, ending the era of the record-low 0.1 per cent cash rate.

Economists with the major banks are now expecting the RBA to raise rates by 2.15 percentage points within a year – marking the fastest annual increase since 1994.

Before embarking on its first rate rise since November 2010, the RBA last month forecast an increase in the cash rate to 2 per cent would cause a 15 per cent plunge in Australian property prices.

Sydney’s median house price has climbed by 17.1 per cent to $1.417million in the year to April.

In a sign of a cooling market, Sydney’s weekend auction clearance rate has plunged to just 58.7 per cent, down from 81.4 per cent a year ago, new CoreLogic data revealed (pictured is terrace house on the market)

In Melbourne, median house prices have risen by a more subdued annual pace of 10.1 per cent.

But the smaller capital cities were tipped to better weather the rate rises, with Brisbane property price expected to rise by 1 per cent, on a net basis following a 4 per cent drop in 2023.

Westpac and ANZ are both expecting the RBA cash rate to hit 2.25 per cent by May 2023 as the RBA raised rates seven more times to the highest level since 2015.

It would also mark the fastest surge in the RBA cash rate since 1994.

Mr Edge recommended first-home buyers, whether they were an owner-occupier or an investor, stuck to borrowing no more than six times their salary before tax.

‘They need to be very mindful of that: interest rates are on the way up,’ he said.

‘You’ve got to make sure you’re not overleveraged.’

Westpac is expecting Sydney (Harbour Bridge, pictured) home prices to decline by 14 per cent by 2024 as Melbourne property values fell by 14 per cent

The Australian Prudential Regulation Authority deems ‘six’ to be the mortgage stress threshold.

Those who can’t afford a house in Sydney can still find houses at that price points in pockets of outer Melbourne, Brisbane, Adelaide, Hobart, and regional areas like Cessnock in the Hunter Valley and Nambucca Heads on the New South Wales Mid-North Coast.

Under the federal government’s Home Guarantee Scheme, a first-home buyer can buy a home with only a 5 per cent deposit, with the taxpayer underwriting the rest of the usual 20 per cent deposit.

In western Sydney, a range of postcodes more than 40km from the city centre are approaching that $900,000 threshold, with Mount Druitt having a median house price of $861,604 while neighbouring Rooty Hill has a mid-point price of $856,910, CoreLogic data showed.

Single parents will be able to get in with a deposit of just two per cent, under a broader program with 50,000 more places for 2022-23.

Lloyd Edge is the author of Buy Now: The Ultimate Guide to Owning and Investing in Property, published by Wiley

How YOUR mortgage repayments could surge under a 2.25 per cent cash rate

Calculations based on variable mortgage rates rising from 2.29 to 4.44 per cent in line with the cash rate increasing by 2.15 percentage points from a record-low of 0.1 per cent to 2.25 per cent