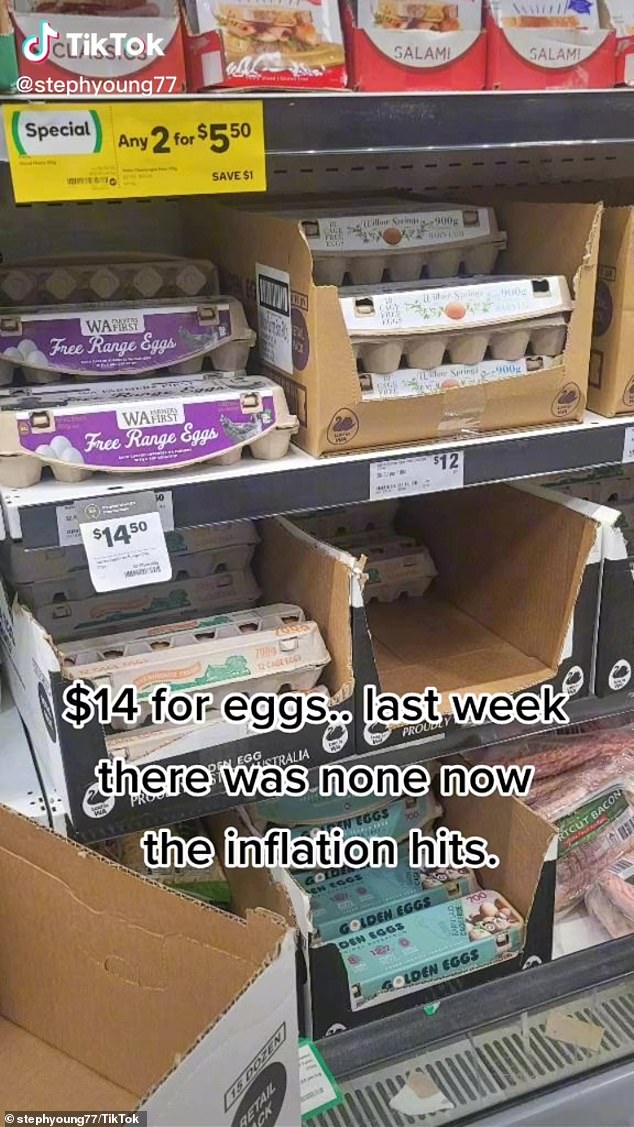 A Woolworths shopper has sparked outrage after sharing a picture showing the shocking price of a carton of eggs.

The image, which was captured by Stephanie Young at her local Woolworths store in Perth, Western Australia, shows the carton of free range eggs was priced at $14.50.

Another brand of eggs were listed at $12 on the shelf.

‘$14 for eggs. Last week there was none now the inflation hits,’ Ms Young captioned the clip.

She jokingly wrote in her post, ‘Time to get chickens??’

A woman has expressed her shock over the new cost of eggs, sharing a photo of egg cartons and the hiked price tags below to social media

Several shoppers conveyed their disbelief over the price rise in the comments section.

‘Hope they are laced with gold,’ quipped one user in response.

‘Who in their right mind is paying $14 for eggs,’ said another.

A third commented: ‘Sit there till they go off, ridiculous.’

Many users agreed with Ms Young’s suggestion to purchase a chicken instead to save costs.

Ms Young added that other dozen eggs stocked at her Woolworths store were priced at $8.80.

Egg Farmers of Australia CEO Melinda Hashimoto said in a statement rising input costs and shortages are to blame for the price increase of eggs in supermarkets.

Ms Hashimoto explained that the cost of laying hens had increased by 20 per cent, feed grain by 45 per cent recently and canola oil by 141 per cent per tonne.

‘The speed of rising farm input costs, that are required to raise hens and produce quality eggs, is so alarming that some long-term egg farmers are genuinely fearing for the future of our industry,’ she wrote.

‘It is a reality that Australians are going to have get used to paying more if they want their eggs and other food grown in Australia, or they’ll see Aussie farmers go out of business.’

‘Likewise, wholesalers are urged to review the price they pay for Aussie eggs, to ensure our farmers get a fair and profitable return on their product,’ Ms Hashimoto added.

It comes as shoppers are being warned to expect the cost of products on supermarket shelves to soar by more than 12 per cent in 2022.

Ben Gilbert, retail analyst at investment bank Jarden, says the price increases at supermarkets will be large as inflation continues to soar.

‘Price increases are significantly larger than we expected,’ Mr Gilbert said in his survey of key retail suppliers.

‘Further increases are planned, either a second or a first at a planned weighted rate of 7.4 per cent. This paints a scenario whereby we could see an annualised run-rate of more than 12 per cent through 2022,’ he said.

A head of iceberg lettuce will set customers back $5.50 – more than a McDonald’s cheeseburger or 10 pack of chicken nuggets from Hungry Jacks

Meanwhile, he expects the number of specials and sales at supermarkets to drop.

‘Despite retailers and suppliers actively pulling promotions through January, reflecting supply chain issues, not all suppliers are able to concurrently or are planning to reduce promotions,’ he said.

‘We found 49 per cent expect to reduce promotions, while 11 per cent are unsure.’

Some groceries at Australia’s major supermarkets have already risen up to 94 per cent, data released last month revealed, with supermarkets admitting they have been forced to pass rising costs on to customers and warning it is only going to get worse.

Coles has jacked up prices by more than 3.3 per cent over the March quarter to pass on the inflated cost of shipping, fuel, meat, and fresh vegetables, and the supermarket giant warns costs could climb even further in the coming months.

Meanwhile Woolworths warned that 160 out of its top 200 suppliers has requested an increase in the cost of their product, with suppliers expected to ask for a further hike in the next 12 months.

A head of lettuce at $5.50 is now more expensive than a $4 McDonald’s cheeseburger.

Nutritionists fear the situation will be detrimental to Australians’ health as families struggling to make ends meet turn to cheaper junk food.